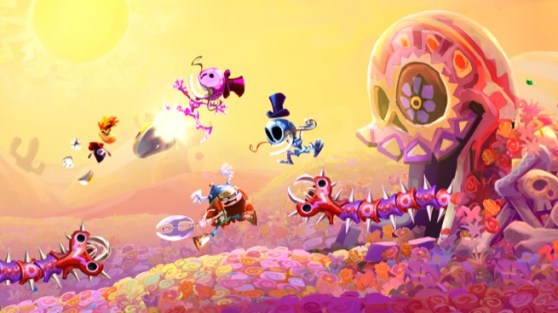 Developer Ubisoft Montpellier is trying to perfect the 2D platformer genre with Rayman Legends. That might not be the company’s explicit goal, but considering the level of refinement it’s made to the formula built from 2011’s Rayman Origins, the team is certainly headed in that direction.

Since the delay imposed by publisher Ubisoft at the beginning of this year, the development team has taken time to add new levels, bosses, and features to Legends as it ports the onetime Wii U exclusive to the Xbox 360, PlayStation 3, and PlayStation Vita. I spoke to lead game designer Emile Morel about what they’re working on leading up to the Sept. 3 launch and why Legends is shaping up to the be the biggest Rayman game yet. 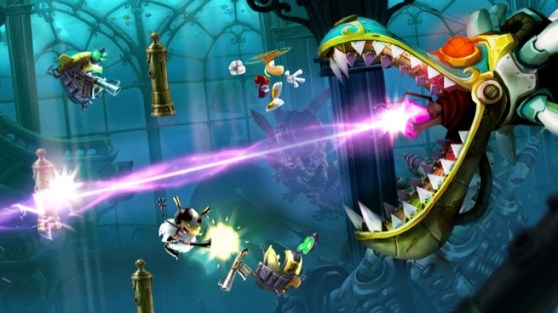 Making the most out of the delay

Morel figures that when you add in the almost 30 levels they’ve added (bringing the total to over 100), it will take an impressive 20 hours to get through this sidescroller. The team also decided to flex some of the power of its special 3D-development software it uses to create this 2D game, something it hadn’t really done yet. This translated into epic boss battles like the one I saw titled A Madman’s Creation. Here, Rayman and friends battle a gigantic, serpent-style robo-dragon inside of an ornate glass mansion under the sea.

The dragon weaved in and out of background and foreground creating a nice sense of depth. It would then pop up in the players face to fire off a laser from the pink jewel in its mouth and then repeat the process.

“This is typically the kind of level that costs a lot, in terms of all the details you have to put in and the tweaking,” said Morel. Though the team still had to put in long hours to make sure these beefed-up boss battles were done right, creating those moments in Legends was something they were able to explore given the extra development time.

Ubisoft Montpellier also had to figure out a way to adapt the segments that feature the flying frog Murfy from the Wii U’s GamePad to the other consoles’ traditional control layouts. The Wii U version of Rayman Legends supports five-player co-op, where four players control the main heroes and a fifth guides Murfy with the touchscreen. The amphibian can attack enemies, move platforms, cut ropes, and provide other support. The Vita version is similar except it only supports two players (a main character and Murfy).

For the other versions of the game, however, one player can press a button to move and guide Murfy to areas of interest and the flying frog friend will know what to do based on the context. Morel assured me that this would not interrupt the flow of the levels too much, as players can keep moving during this time. 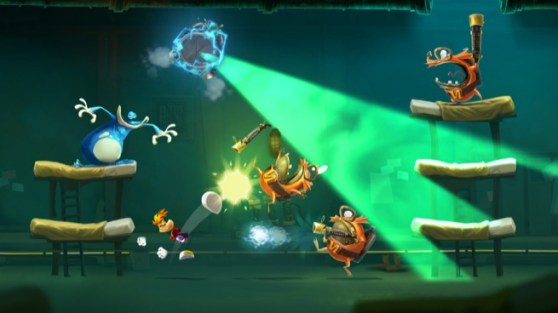 These additions help distinguish Rayman Legends from Origins even more so than what the Ubisoft Montpellier had back in February. When I first heard of this new instalment, I assumed it was just going to be a collection of new levels and not much more. But I found that the little things like nonlinear paths through stages, beat-based rhythm levels, and 10 playable female characters make Legends seem more like a proper sequel.

The Mansion in the Deep level had me sneaking around like James Bond (or Ubisoft mascot Sam Fisher from Splinter Cell, I suppose), avoiding flying sentry robots with green and red light vision. I had to navigate different floors and rooms of the building in search of some switches to flip in order to progress. I appreciate these areas that break from the conventional “just go right” approach of the genre without delving too deeply into the elaborate labyrinths of the Metroid/Castlevania series.

That is not to say that Legends doesn’t have its share of heading to the right. Each world has a musical level (in place of Origins’ shoot-’em-up stages) that feel similar to rhythm-oriented platformers like Bit.Trip Runner and HarmoKnight. They’re essentially the treasure-chest-chasing challenges from Origins but set to music.

Playing as Rayman, I was sprinting atop oversized Mexican toy snakes, kicking down bright-colored Dia de los Muertos skeletons, and ziplining along strings laid out like a music staff. All of this was in time with a Spanish guitar and kazoo duet of Survivor’s Eye of the Tiger. It was a blast.

These fun musical stages came about almost by accident. Rayman creator Michel Ancel was demoing a level of Legends to some of the men in suits once, but the stage was a little too hard to play well by anyone except the guy who created it. Since that designer wasn’t able to make the meeting, Ancel showed footage of the guy playing the level, lightheartedly synched up to a heavy metal song. Everyone loved it, so Ubisoft Montpellier then decided to add stages like that to the game on purpose. 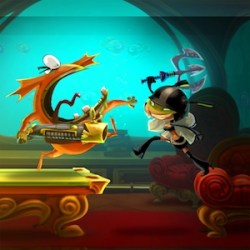 As far as the Rayman roster goes, the developer has added 10 new playable female characters (compared to zero in Origins). The women all based on the same template, but Morel explained that the area-themed costumes and names for each qualifies them as separate people. Barbara is the barbarian with wings on her helmet and an ax, for instance. While Ursula (an homage to the Bond Girl Ursula Andress from the film Dr. No) is suited up for deep sea espionage and wields a trident.

Though each of these female warriors still need to be initially rescued, they provide a refreshing break from the voluptuous, scantily clad nymphs from Origins (how was I supposed to explain them to my niece?!), whose only purpose was to bestow new powers upon the male heroes. They can kick ass and help bring some much-needed gender balance to the game.

“The key thing about this new character to us, is to make sure that when you play, you have four different silhouettes,” said Morel. “So you have Rayman, Globox, a Teensy and another character,” as opposed to the confusing setup in Origins’ co-op with two Teensy players at once.

For both experts and novices

All of these features round out a game that has been carefully balanced to cater to both expert and new players. While all the unlockable skills from Origins are available from the beginning Legends, each world will focus on one at a time. Novices can go through the stages at their own pace, while pros will appreciate the returning ingenious level design that allows each level to double as a race course with an optimal path.

“We wanted to keep the flow to the game,” said Morel. “That’s the core of Rayman gameplay that we know experienced players enjoy.”

Anyone who is a fan of old-school platformers should keep an eye on Rayman Legends. Ubisoft Montpellier looks to have improved tremendously on an already solid experience from Origins and the version of Legends they had at the beginning of the year.

“I was already happy with the game we were about to finish in January … proud of it,” said Morel. “But honestly, now that I see what we have right now, I feel like it would have been sad to release the game then because right now. It’s really in a sense that it’s the biggest, longest Rayman game we’ve ever had.”