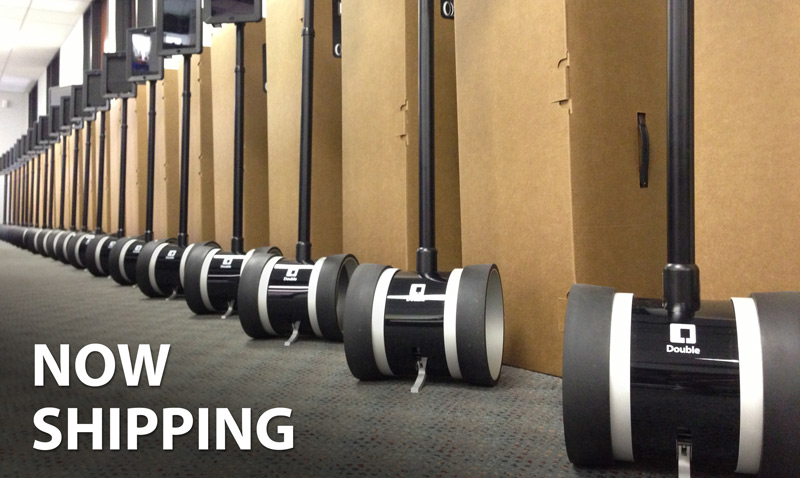 The Y Combinator-backed startup officially launched in mid 2012 with a Segway-like telepresence robot that balances on two large wheels, uses any iPad as its screen and eyes, and rests on a smart kickstand when not in use. And, of course, lets you virtually visit locations, participate in remote meetings, and show your smiling face to distant colleagues.

That’s good news, Double Robotics said, not just for themselves, but also for hardware startups in general. There was a significant amount of skepticism that a $20,000-$40,000 Y Combinator-style investment would get the hardware company up and running, but Double Robotics was able to generate enough interest — and $1.2 million in presales — to pull off what would have been seen as impossible just a few short years ago.

“Now that Pebble, FORM 1, Oculus Rift, and Double have all begun shipping, I think it’s clear that hardware startups are legit and here to stay,” Cann says.

There’s one more bit of good news for anyone who wants a telepresence robot.

Above: Nasa CIO using a Double Robotics telepresence robot to attend a conference.

To celebrate the shipping milestone, Double Robotics is extending the pr-order pricing of $1,999 for one more week. That preorder pricing was low at least partially to cover the perceived risk of buying something that was not yet shipping — a problem that no longer applies. After June 6, however, pricing will jump up to $2,499.

Who could have guessed that a national budget crisis would be a smart startup’s marketing opportunity?