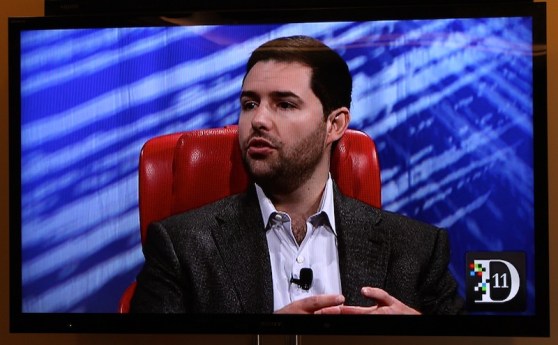 That’s partly because it’s located in Santa Clara, in the heart of Silicon Valley and about 40 miles south of the NFL team’s nominal hometown. But it’s also because the stadium will be loaded to the uppermost seats with a vast quantity of electronics and networking gear provided by Sony.

“We want to be a software-driven stadium, not a hardware-driven stadium,” said 49ers owner Jed York while speaking onstage today at D11, a tech conference organized by All Things D. He was joined onstage by Kazuo Hirai, the president and chief executive of Sony.

“We want to build out the infrastructure so you can plug into the stadium any way you want,” York said. 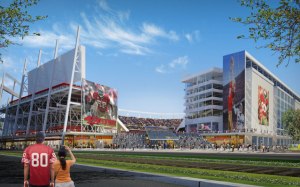 Above: A rendering of the new 49ers stadium in Santa Clara. Via  the stadium‘s website.

For example, while you’re in the stadium, you can connect to its wireless network using your smartphone or tablet to watch the game via any of the many 4K (high-resolution) video cameras installed throughout the facility. You could pick a point of view that offers a better vantage point than your seat, you could watch closeups of the plays, or you could conceivably tune in to players’ helmet cams.

All of these activities will be done with the fans’ own hardware, so Sony isn’t building tablet interfaces into the seats. Or you can just leave your phone in your pocket and watch the game the old-fashioned way.

“You create your own experience when you’re in the game,” said York.

The 49ers are also promising that the stadium infrastructure will help fans find food choices within the stadium or potentially connect with other fans via social media. It plans to offer people the option of getting digital tickets or paper ones, and it will even provide routing assistance to help you find the best travel route to the game before you even leave home.

Hirai said that Sony has done similar installations with other stadiums, but not to the same level. He said that the technology would work with many different manufacturers’ phones and tablets, not just Sony’s. And he emphasized that it wasn’t just about blinging out the stadium with as much tech as possible.

“It’s not about putting in physical cameras and screens, it’s about the experience,” Hirai said.

“We want you to bring your own smartphone, your own tablet into the game, and have the back end that just works,” York said.

The stadium will be open for the 2014 season and will host Super Bowl L in February 2015.

Despite Sony’s large involvement, the stadium won’t bear its name. Instead, it will be called Levi’s Stadium — the clothing company bought the naming rights earlier this year.

Check out more views of the new stadium.