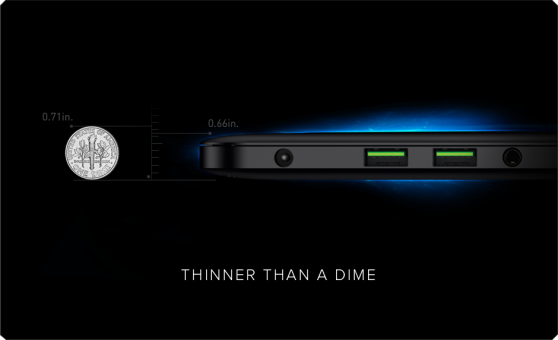 The latest Razer Blade model is being advertised as “thinner than a dime,” measuring 345mm wide-by-16.8mm high and weighing just 4.135 pounds while still packing in all of the following key specifications:

It’s important to note that “thinner than a dime” actually means shorter than a standing dime (see above). While Razer’s catchy tagline is a bit misleading, the Razer Blade is still thinner than a MacBook Air and delivers “more performance per cubic inch” than any other gaming laptop.

“The 14-inch Razer Blade packs a ton of horsepower into a very small chassis,” said Rene Haas, the vice president and general manager of notebook GPUs at Nvidia. The chipmaker unveiled its new line of GeForce GTX 700M graphic processing units (GPUs) alongside the Razer devices, boasting unparalleled performance and efficiency per watt and “the thinnest chassis ever seen in the gaming segment.”

The second new notebook, the Razer Blade Pro [above], is twice as fast as last year’s Razer Blade model, according to the company. While it compares to similar notebooks in stature, Razer is promising more power than its competitors. The Razer Blade Pro is not only targeted at gamers but also creative professionals such as graphic designers and video editors using processor-intensive programs.