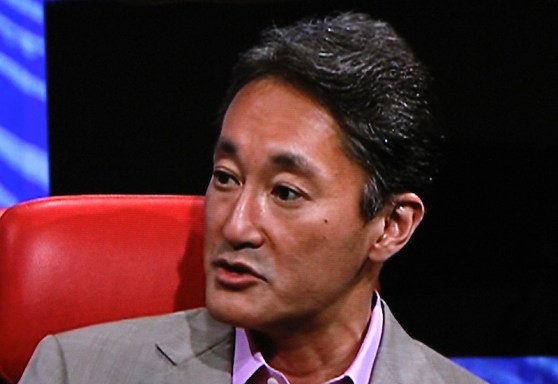 Sony chief executive Kazuo Hirai said today that the PlayStation 4 will differ from Microsoft’s Xbox One, which is being pitched as an all-in-one entertainment box in the living room.

“I fundamentally believe that the initial market that we need to make sure we appeal to with any new platform … is really the gaming audience,” Hirai said. “They will be the supporters of your platform and they will help propel the installed base.”

He spoke at the D11 conference hosted by AllThingsD. He was joined by Jed York, the chief executive and owner of the San Francisco 49ers, and they talked about the fan experience Sony is helping to create for the 49ers’ new high-tech stadium in Santa Clara. He made the remarks in response to a question from moderator Walt Mossberg of the Wall Street Journal. Sony will reveal more at the E3 video game trade show in Los Angeles during the week of June 9. (Here’s our preview of the show).

Hirai acknowledged the PS4 will have non-game applications. But Sony will not emphasize those at the outset as it did with the launch of the PlayStation 3 game console in 2006. The PS4 is coming out this fall.

He said Sony would add other entertainment apps, “But that’s after we establish the platform as a video game platform. We want to make sure that we are there for the gamers with our PS4 as well. They will go beyond this, but they’ll definitely start with gamer first.

He concluded, “For us, it’s all about the gamers.”

By contrast, Microsoft’s Xbox One unveiling had lots of apps that have nothing to do with games, from using voice commands to change TV channels to using Skype while watching shows.

VentureBeat’s Dylan Tweeney is on site at the D11 conference in Rancho Palos Verdes, Calif., and provided notes for this story.