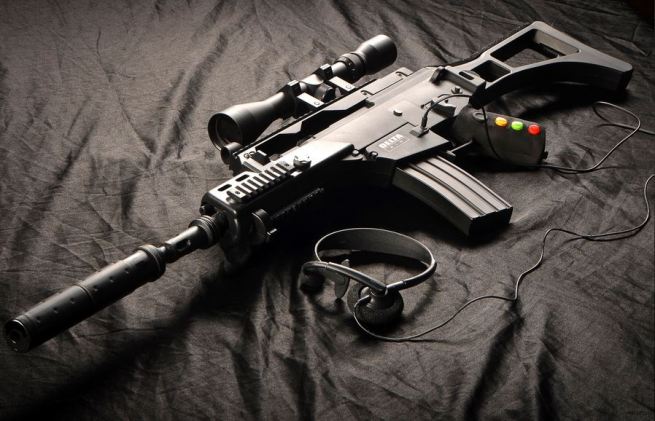 Video games lead to violence. They warp impressionable young minds because titles like Call of Duty and Battlefield are so realistic that players can’t tell the difference. They are worse than guns.

We’ve all heard these extreme claims from the National Rifle Association, from politicians, and from Katie Couric. It doesn’t seem to matter to them that the evidence to support those ideas is nearly nonexistent. The market for violent games and guns is packed with a massive amount of potential negative energy that could erupt into another media firestorm at any moment.

That’s why it’s easy to question David Kotkin’s sanity. The peripheral designer is combining guns with games in a new controller for first- and third-person shooters on PC, Xbox 360, and PlayStation 3.

Kotkin calls it the Delta Six. It is a controller that he modeled after a real firearm. It is gun-metal black. To fire, you pull the trigger. To reload, you tap the magazine. It comes with a silencer and a stock to make it look and feel more like an assault weapon. When you pull the trigger, it provides simulated recoil. He will make the final product out of plastic and with an orange tip, but he is clearly targeting people who want something that feels authentic.

“It’s a gaming gun for adults,” Kotkin told GamesBeat. “That’s what I want.”

It’s also a sensationalized Fox News story waiting to happen, but Kotkin isn’t going to let that stop him.

Right now, Kotkin is running a Kickstarter to fund production of the controller. He asked for $100,000. With six days left, more than 600 backers are pledging almost $120,000.

His goal is to provide a more realistic gun experience in today’s modern shooters.

“It might not be better than a controller, but you’re going to feel more absorbed in the experience,” said Kotkin. “It’s going to be a 4D experience where everything is happening, and you’ll feel like you’re in battle.”

Delta Six isn’t just a light gun. It uses full motion controls and realistic actions to give players a more life-like experience. Gamers can move their in-game character by tilting the controller backward and forward or from side-to-side. Perhaps most impressive, Delta Six senses when players look down its scope. This causes the onscreen character to look down its sights as well.

“I know I can bring a better-than-arcade-like experience to the home,” said Kotkin.

That’s exactly what is so bold about Kotkin and the Delta Six. It’s incredibly easy to imagine the 11 o’clock news running B-roll footage of the controller in action over Kotkin’s own claims that he wants to immerse players in a more realistic shooting experience. While everyone else is slowly backing away from the powder keg labeled “media controversy,” this guy is dancing right next to it with a lit torch.

Kotkin says he believes the potential for controversy has already scared away some partners, like Arduino-creator Massimo Banzi.

Kotkin is using the popular open-source programming microcontroller Arduino to run all the Delta Six’s many functions. It’s an easy-to-use board that makes programming hardware more accessible. Banzi reached out to Kotkin to make sure he was using legitimate products (counterfeit Arudino boards are common). Kotkin exchanged a few email where he told Banzi that he had a bad experience with one of the pirated boards and that he was willing to attest to the quality of the official product.

Kotkin says this led to Banzi agreeing to help promote the Delta Six controller — but since those emails, which they exchanged a few weeks ago, Banzi has stopped responding to Kotkin. 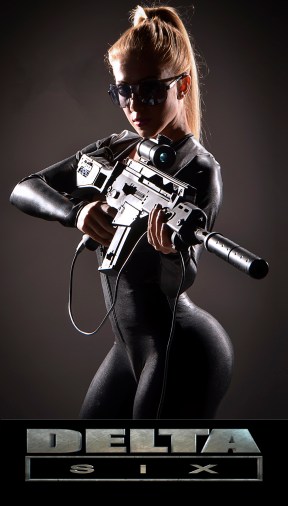 Kotkin thinks it’s because the Delta Six is a gun controller.

“People are nice to me [and want to help], but then they have people around them that say, ‘You want to get involved with a gaming gun? That’s so controversial. Don’t get near it.’ I don’t know for sure that’s what is happening, but that’s what I believe,” said Kotkin.

We reached out to Banzi to ask for his stance on the controller, but he did not respond to our requests for a comment.

“I get the feeling that he’s out,” said Kotkin.

Kotkin also claims that he had a meeting with Activision to get the controller involved with the Call of Duty franchise.

“I had been making the Delta for a long time,” he said. “I was going to meet with them in January.”

He says that Activision quickly canceled the meeting after the Sandy Hook school shooting in December.

“Now they’re not interested in anything like that because they’re getting all this ‘culture of violence’ heat [from the media],” he said.

I reached out to Activision to confirm that it planned on meeting with Kotkin, but the publisher never got back to me.

“I can understand why people are hesitant,” said Kotkin. “It’s like having a friend, and your wife doesn’t like him. She gives you so much grief that it’s just not worth it.”

“I got one woman who called my phone and told me I’m ruining the world, basically,” Kotkin alleges. “I guess a press release from a couple of years ago had my number, and she found it there. It was a little bit traumatic.”

Again, we can’t confirm that this call ever happened. I got the sense when speaking with him that he is trying to stir up controversy to build up publicity around his Kickstarter.

After our call, I followed up with Kotkin by email to ask if he thought a controversy similar to the Ocean Marketing fiasco would benefit Delta Six. He didn’t respond.

Even if Kotkin is trying to attract extra controversy, I believe him when he says the Delta Six is too scary for some companies — and this is before the thing is even out. The gun is still in development. Things will get crazier once the controller starts making it out to consumers and TV networks like Fox News begin to learn about it.

Kotkin says he is willing to handle that heat.

“I can take it,” he said. “But it’ll be much easier if I’m making money. I can take it if my invention is really good — if I’m making something that takes the player to another level. For the normal person playing Call of Duty or Battlefield, if they can put on their headsets and use the gun to escape into a game, then I’m making people happy.”

It’s more than that, though. The designer says he grew up when parents first started questioning the wisdom of giving toy weapons to their children.

“When I was growing up during the ’70s, there was a push to get rid of toy guns and violent cartoons,” he said. “Those were the things I loved most as a child. They took Three Stooges off the air and Johnny Quest because it showed guns. Saturday cartoons suddenly became so bland. They had no more punching and no more action. Maybe I’m still a kid — but I’m not some gun guy. I don’t even own guns, but I’m just against others curtailing my fun.”

Kotkin says that nothing bothers him like when people tell him that he can’t handle something or he can’t be trusted.

“Maybe that goes back to when I was a kid, when they took away the toys.”

Now, as an adult, Kotkin is trusting that he can make a game controller that looks and behaves like a real gun. He’s betting that adult gamers can handle it and that the only result will be that they have more fun.

“I’m making stuff that doesn’t exist anymore,” said Kotkin. “I’ve been waiting my whole life for a good gun controller, so I just went ahead and made it.”