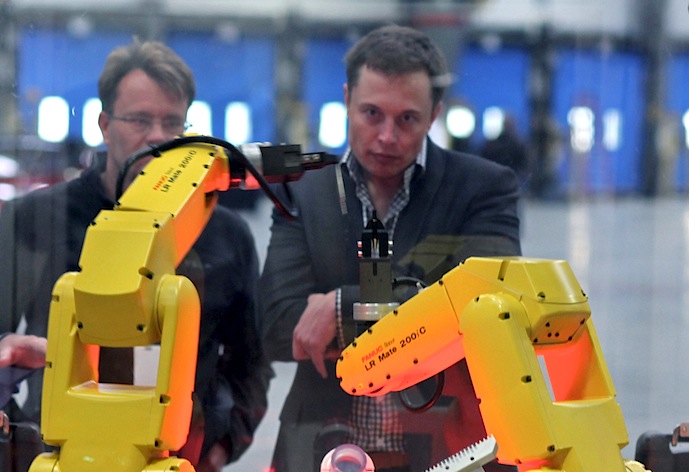 The Founding Fathers were do-it-yourselfers, from Jefferson’s explicit idealization of the self-sufficient yeoman farmer to Franklin’s intrepid experimentation with electricity. Over the centuries, a return to this kind of independent DIY spirit has helped fuel the Industrial Revolution, the radio era of the early 20th century, the hippie movement (the part of it exemplified by the Whole Earth catalog, anyway) and punk rock.

Along the way, America became the greatest industrial nation on Earth, creating airplanes, cars, electronics, computers, and eventually the Internet.

Then we gradually started relocating factories overseas, as we grew to value inexpensive goods made by cheap labor over arguably better-quality products made by skilled (and relatively expensive, often union) labor at home. Americans pursued other, more lucrative and more stimulating careers than factory work.

That made sense, for awhile, as global markets enabled “labor arbitrage” and let the U.S. concentrate on areas where it still held a competitive advantage: design, engineering, software, marketing, advertising.

At the same time, Americans as individuals stopped getting their hands dirty. Fifty years ago every car owner had to know something about basic repair; today, people who can fix their own cars are rare. (Cars themselves are nearly impossible to repair for the home mechanic anyway, given the profusion of electronics under the hood — but they’re also far more reliable than the cars of 50 years ago, so home repairs are less necessary.) Fewer and fewer people do their own home repairs, plumbing, gardening, canning, or clothes making and mending.

This is a broad generalization, but the arc of the shift seems clear. America, by and large, has been content to let other people make stuff for us in the physical world, while we concentrate on the bits. No computers are made in the U.S., apart from a few of their components. No smartphone has ever been made here, again, excepting a few components, such as Gorilla Glass (made by Corning in Kentucky).

But there are signs that the trend is starting to reverse.

Motorola, a longstanding American electronics company that fell on hard times and got bought by Google a year and a half ago, is reopening a phone factory near Forth Worth, Texas. It will assemble the company’s latest phone, the Moto X, which Motorola Mobility CEO Dennis Woodside says will be the first U.S.-built smartphone ever. It will employ 2,000 people to do so.

Now, Motorola is a much smaller company than it used to be, with just 3 percent of the smartphone market. But what about General Electric, one of the titans of our industrial economy? It too is starting to look at relocating jobs.

“The era of labor arbitrage is ending,” General Electric chairman and CEO Jeffrey Immelt said this week at D11, a tech conference in southern California. Thanks to new manufacturing technologies that reduce the amount of labor required, he said, “you can basically make whatever you want, wherever you want.”

And at the same time, the DIY spirit is enjoying a resurgence as a growing number of people, disillusioned with bland, prefab corporate culture, are embracing the joys of making their own stuff. “Maker culture” has become a thing, with hundreds of hackerspaces opening up across the country where people can use tools, learn how to solder, or just hang out and work on projects with others. Libraries are starting to offer similar workspaces. Some towns are getting tool lending libraries. And Maker Media’s Maker Faire has grown from a once-a-year event in San Mateo, Calif. to a franchise that happens all over the country (and the world), with four events in four different cities this year.

There’s even a growing array of startups coming out of the maker movement, as entrepreneurs realize that iPhone apps, photo-sharing sites and ad-supported social networks aren’t the only way to make a business — you can create useful things in the real world, too, and sell them.

In short, many people are growing tired of a world where everything is made (probably of plastic) somewhere overseas, perhaps in wildly unsafe factories, packaged in cardboard and more plastic, hung on a peg in your local big-box store, and brought home in the back of your minivan.

They are realizing that getting your hands dirty is fun.

It’s also good business. If a captain of industry like Immelt is saying that the era of shipping manufacturing overseas is ending, I pay attention. His reasoning is that GE’s real product is not the physical goods, but rather the process that it takes to create them. They can deliver that “code” anywhere in the world.

Manufacturing, it turns out, is also more of a competitive advantage than many companies previously believed. Apple understood this early on, and forged extremely tight relationships with its Asian suppliers. Coupling engineering tightly together with manufacturing helps make better products.

While Apple was able to pull that off while spanning the Pacific, most companies don’t have its clout. For them, locating factories in the U.S. can actually make them more competitive.

Motorola’s Woodside put it simply: “When your phone manufacturing is thousands of miles away from your designers and your engineers, you lose the ability to innovate.” By putting its factory in Fort Worth, Woodside says, “We think that’s going to allow us to innovate and iterate much faster.”

Motorola’s senior vice president of advanced projects Regina Dugan put it in an even broader context. “I believe this country was founded by makers and creators,” she told me earlier this week. “We are not only consumers. We are also creators. I think it speaks to a very foundational human desire to make things. And I think we have to return to that as a country.”

GE and Motorola are just two examples of how American industry is shifting the way it thinks about manufacturing. But if you put their moves together with the DIY trend, I think there are reasons to be cautiously hopeful about the future of making stuff in the United States.

So let’s get to work.

This story originally appeared on LinkedIn. Follow me there!