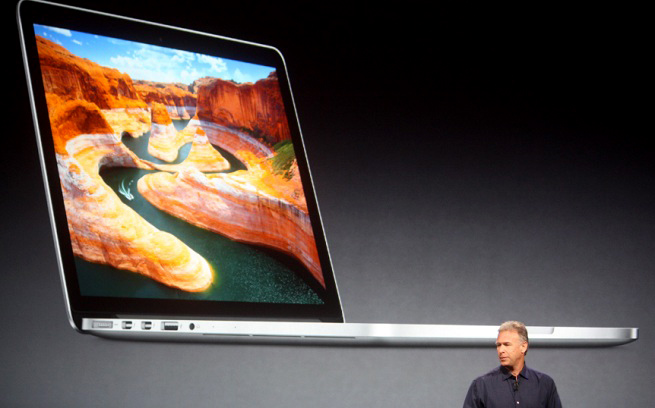 Apple’s high-resolution Retina MacBook Pro may already be thinner than past MacBook Pros, but it’s still nowhere near as thin as the ultraportable MacBook Air. But that size gap may change a bit at Apple’s Worldwide Developer Conference next week.

According to KGI Securities analyst Mingchi Kuo, Apple will reportedly take advantage of the power saving features in Intel’s new Haswell processors in the Retina MacBook Pro to give it an even slimmer profile. Even though it’s tough to rely on analyst speculation, Kuo has a better track record than most, 9to5Mac points out.

Apple unveiled the Retina MacBook Pro at last year’s WWDC event, so it’s about time we see a major update. Its big claim to fame is its 2560 by 1600 pixel resolution display, which makes it one of the highest resolution laptop screens on the market. The Retina MBP also eschews an optical disc drive and is only available with a solid-state hard drive. In many ways, it’s Apple’s vision for where laptops are headed — even if some consumers aren’t ready to give up their CDs and DVDs just yet.

Alternatively, Apple could just throw in a Haswell chip and leave the Retina MBP’s case the same, which could lead to battery life of up to 10 hours.

Among less significant upgrades, Kuo notes that the Retina MBP could get a new 1080p FaceTime camera, and that the MacBook Air could get a slightly better microphone (which would be good for video chats). We haven’t heard anything yet about a significant MacBook Air update, which is something I know plenty of Apple fans are looking forward to.