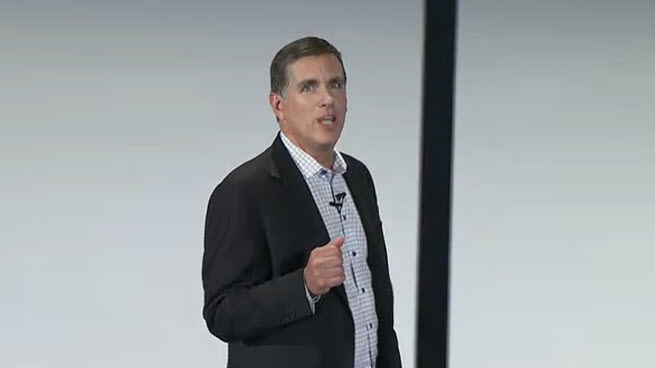 Intel showed off its next-generation tablet and smartphone processors today at the Computex computer trade show in Taiwan. 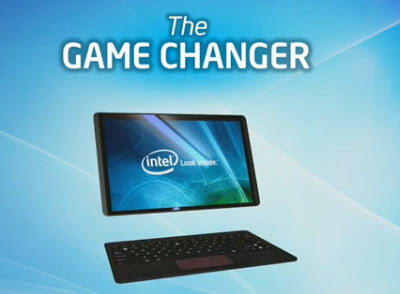 Tom Kilroy, Intel’s executive vice president of sales and marketing, showed demos of two different upcoming Atom processors during the speech. The company is introducing its fourth-generation Core processors, previously codenamed Haswell, at the trade show. But it is also touting what it will do for consumers in the future. Both new chips are critical to Intel’s transition from a PC chipmaker to a maker of chips for smartphones and tablets.

“We believe this is a 2-in-1 era,” Kilroy said in his speech, referring to devices that can be converted into laptops or tablets.

Later this year, Intel will unveil the Silvermont microarchitecture for future Atom microprocessors, which are targeted at low power devices. The Bay Trail version of Silvermont will be used in tablets this holiday, Avoton will be used in microservers, and Merrifield will be used in smartphones. Silvermont promises three times more performance and five times lower power compared to the current Intel Atom processors. Bay Trail will support high-performance mobile computing and deliver more than 8 hours of battery life.

“Today we deliver on the vision set forth 2 years ago to reinvent the laptop with the introduction of our 4th generation Intel Core processors that were designed from the ground up for the Ultrabook and serve as the foundation for a new era of 2-in-1 computing,” said Kilroy. “We made one of the most seismic changes to our roadmap ever to build these new Core processors that deliver the stunning performance of the PC and the mobility of a tablet in one device. The new processors power the most exciting 2-in-1 designs to-date.” 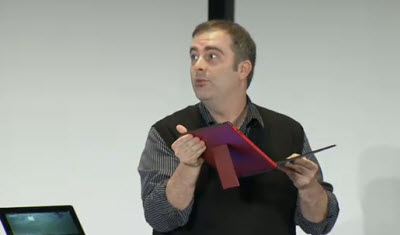 Kilroy also showed 2-in-1 devices (laptops that also serve as tablets) and how they can be controlled through gesture computing, such as waving your hand in front of a sensor. Dubbed perceptual computing, such technologies will bring in voice, face recognition, and other technologies beyond the touchscreen into modern computers. Intel showed off its Creative Senz3D peripheral camera, which will be available next quarter. Intel plans to build 3D depth camera technology — like that used in Microsoft’s Kinect motion-sensing system for the Xbox 360 game console — in Intel devices in the second half of 2014.

The codenamed Bay Trail will be a quad-core chip built with a 22-nanometer manufacturing process. It will be used in x86-based tablets that can run Microsoft’s Windows 8 operating system. Bay Trail will offer twice the performance of the Clover Trail processors introduced for tablets last fall. The Bay Trail chips will also have lower power consumption. That means we’ll see tablets with longer battery lives, better performance, and thinner cases. Intel says Bay Trail tablets will be thinner than 0.3 inches.

“Bay Trail is optimized for Windows and Android tablets,” said Patrick Moorhead, an analyst at Moor Insights & Strategy. “While it doesn’t yet bring PC performance to a fanless tablet, it does provide higher-end  consumer PC features to the tablet scene like DirectX11 graphics, intelligent overclocking with Intel Burst, and wireless display. For the enterprise market, Bay Trail is a slam-dunk over any of Apple’s solutions given x86 compatibility and PC-grade management, security, and deployment.” 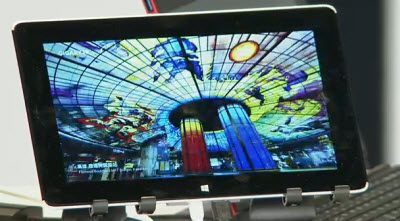 About 50 designs are underway based on Bay Trail chips. Bay Trail will support both Android and Windows 8.1. By the time of introduction, Bay Trail will be used in 2-in-1 systems that cost $399. In the demo, Intel showed the game Torchlight II playing on a Bay Trail machine. Intel also demoed 4K video playing over 4G LTE.

Meanwhile, Merrifield will be targeted at x86-based smartphones. Intel has made some progress getting into smartphones in the past year, but the sales volumes aren’t making a big difference on its bottom line yet. It also showed a working Merrifield design as part of a smartphone reference design, or a prototype that other Intel customers could use to build their own smartphones.

Merrifield will include an “integrated sensor hub” for personalized services. It will also have built-in data, device and privacy protection.