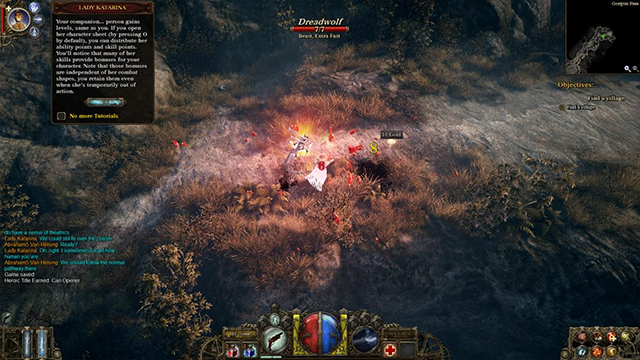 Somebody found out that you liked Diablo. Blizzard’s demonic action role-playing game used to practically be the only game in town when it came to point-and-click monster hunting, but an influx of smaller games (and an eager fanbase who didn’t find the recent Diablo 3 satisfactory) have expanded the market with titles like Torchlight and Path of Exile directly challenging Blizzard’s monopoly on a subgenre that it created.

Enter The Incredible Adventures of Van Helsing, the latest Diablo-esque action RPG out now on PC. With more choices than ever, should players care about another journey filled with gothic beasts and heaps of loot? Helsing tries to win you over with a combination of some new ideas and old-school sensibilities, but it’s not enough to truly propel it to the top of the pack.

A slight change in setting

Most of Helsing’s contemporaries, including Diablo and Torchlight, set themselves in gothic-fantasy settings that begin to all blend together. While the first couple of hours of Helsing take place in and around a small town that feels far too familiar to Tristram, the famous town from the Diablo mythos, things really pick up once you make it to Borgovia (a fictional Eastern European city). It’s still plenty gothic but with a flavor inspired by 19th century England. Cobblestone streets and secret laboratories replace swamps and evil forests. It’s a welcome change in scenery.

Fans criticized Diablo 3 for a lack of options during leveling.  Instead of selecting specific skills through branching trees of abilities, you just unlocked new powers, and every possible one, as you played. Helsing takes a more old-school approach by allowing players to specialize their character through a multitude of choices. 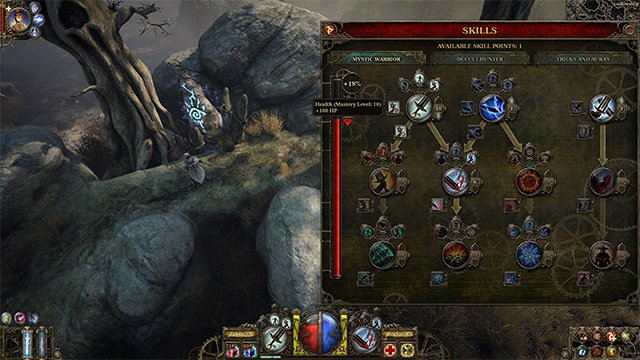 Unlike most action role-playing games, you don’t pick a class for your character. Your avatar, Van Helsing, is capable of using swords, guns, and magic. You decide where to specialize through equipment and by upgrading your stats and skills. The same goes for your companion, Katarina, a ghostly girl who can attack foes, provide stat buffs, and travel to town to sell items (she works much like the pets in the Torchlight series). She levels up separately from Van Helsing, and you can also personally pick her stat increases and equipment. She can also learn a few skills of her own, most of which will add bonuses for your avatar, like added spell power or defense.

Even though the lack of classes may seem restrictive, you have a lot room for character customization. You can create a melee-dependent Van Helsing with a Katarina who picks off enemies from a distance, or you could focus on magical attacks while your companion takes on foes directly.

You can also power your spells and abilities by spending rage, a resource independent of your health and mana that increases as you fight. Using rage will modify your next attack based on bonuses you unlocked in the skill tree. While a normal shot of your gun will just do regular damage, a rage-infused attack can add extra power, hit multiple targets, and slow them all down.

Conserving and wisely using rage becomes an importantly strategic part of the action. You can quickly use it all to take down one over-powered monster, but you might be better off saving it to take down a large wave of smaller enemies.

Occasionally you’ll have to defend your lair (your base of operations between missions) from an attack of monsters. While you do run around and engage them yourself, you can also place traps to slow or whittle them down. It all works a lot like a tower defense game, which may not sound all that unique on its own, but it’s interesting to see some of those elements successively used in an action role-playing game. In fact, I wish I had to defend my base more often than the two times I did throughout the entire campaign. 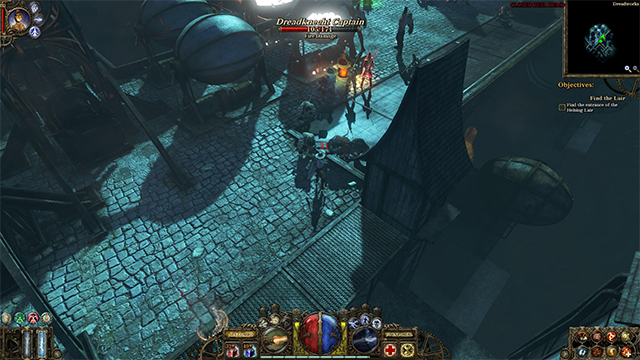 Helsing has some clever writing, especially the banter between its main character and Katarina, but the story was practically non-existent. Van Helsing travels to Borgovia to help out a resistance who’s trying to stop a mad scientist from doing all his evil stuff, and this plot plays out with few surprises or complications. It serves only to send you to the next monster-infested area rather than to provide any compelling reason for Helsing to get involved (other than the fact that he’s a hunter, and this is just what he does).

You don’t even encounter the final villain until seconds before you start fighting him, with the story unceremoniously ending after his defeat. You just don’t have any sense of completing a journey, internally or otherwise.

I encountered a few times when I could barely take a couple of steps without turning into a corpse, even though I just completed the previous area with ease. Even completing every possible sidequest doesn’t save your from random moments of increased difficulty, so you’ll either have to just power through them (you can spend gold to respawn back to exactly where you died) or grind for experience points in some level you already cleared.

Katarina is even more prone to prolonged lengths of inadequacy. When she dies (as much as a ghost can die), she becomes unable to attack or help for a few minutes. Especially towards the end of the game, it seemed like she spent more time inactive than otherwise. You can give her health potions that she’ll use on herself, but they do little to prolong her quick and sudden defeats. 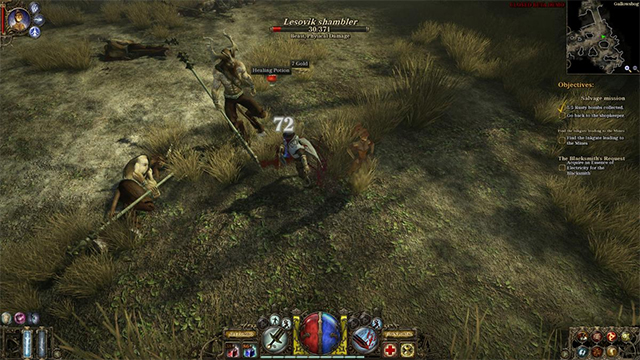 Van Helsing does offer some new ideas to the popular sub-genre of Diablo clones, but it ultimately doesn’t do enough to really stand out. Defending your lair and the change in setting are welcome additions to all the pointing-and-clicking, but you can’t help but feel like you’ve done all this before if you’ve played any Diablo or the numerous games inspired by it. With the recent releases of Diablo 3, Torchlight 2, and Path of Exile, players have a lot options for a bunch of games that all play pretty similarly, and it’s hard for Van Helsing to not feel like another “me too” entry in what is becoming an overcrowded genre.

But that’s not to say that Van Helsing isn’t fun, and — although certainly a clone — it’s well made. You’ll find some great ideas here, and players who prefer Diablo 2 to its sequel will certainly love Helsing’s emphasis on character customization. But the story fails to elevate the familiar action to anything special. Mechanically, this is a great action RPG, but it lacks heart.

The Incredible Adventures of Van Helsing is out now for PC. The publisher provided GamesBeat with a game code for the purposes of this review.