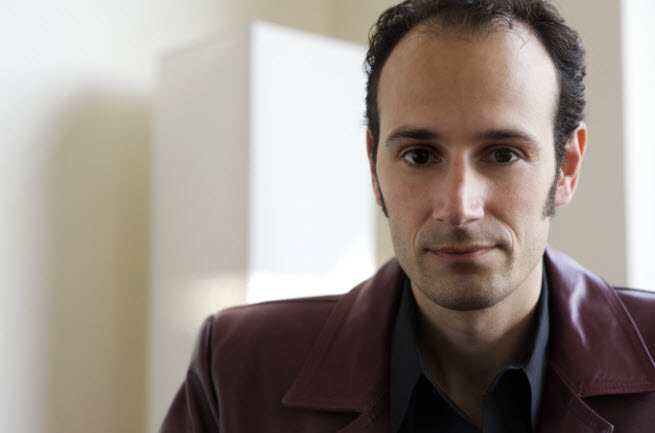 Harmonix Music Systems and Disney Interactive are collaborating on Disney Fantasia: Music Evolved in an attempt to create the next big thing in music games. We’ve all had our turn at Guitar Hero and made fools of ourselves with Dance Central on Kinect, and now he wants us to play this “breakthrough musical motion” game when it debuts on Microsoft’s consoles in 2014.

We saw a preview of the title. And one of the pioneers behind this music-game strategy is Alex Rigopulos, who cofounded Harmonix in 1995. In an exclusive interview, Rigopulos told us that musical creative will be the next big wave, and Disney’s Fantasia is the way you into it Rigopulos hopes it will be as successful in ushering in a new era of music games as Harmonix’s Dance Central was in 2010 when it debuted on Microsoft’s Kinect motion-sensing system for the Xbox 360.

Fantasia is a beloved 75-year-old film with eight memorable vignettes set to classical music. The most iconic of those is a dream sequence with Mickey Mouse as The Sorcerer’s Apprentice, conducting music across the heavens and the seas. If you are expecting to see Mickey Mouse in this game, conducting classical music against the backdrop of the Fantasia movie, you couldn’t be further away from what Harmonix is trying to do with this game. At least that’s our impression from what we have seen so far.

Disney’s Fantasia will be an exclusive on Microsoft’s Xbox One and the Xbox 360 next year. Here’s an edited transcript of our interview with Rigopulos. 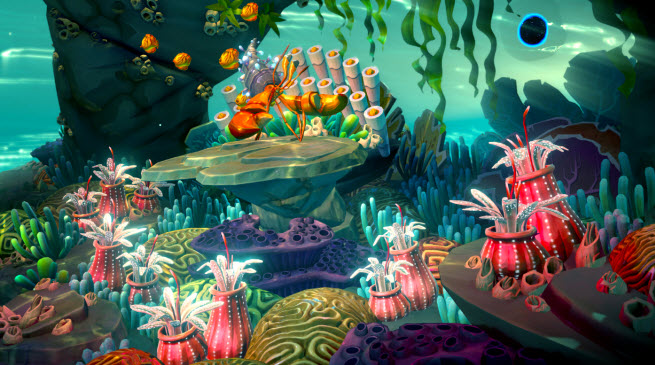 GamesBeat: I saw Disney’s Fantasia during judges’ week. I’d had the early word you were working on a Fantasia game, and I got in my head that it would be something like Mickey Mouse, Fantasia cartoon images, and classical music. What I actually saw was surprising.

Alex Rigopulos: When we started working on the project, we went a lot further than the film itself. We looked at Walt’s original production notes when he was conceiving the film. We never wanted to make a game of the movie. We wanted to look at what Walt’s creative ambitions for the film were and update those for a modern rendition.

GamesBeat: So you never started with just re-creating that cartoon world, Mickey Mouse as the conductor and that sort of thing.

Rigopulos: Of the eight vignettes in the original film, the one that was the most directly inspirational to us was “The Sorcerer’s Apprentice.” The most iconic and enduring image from that vignette is the dream sequence, with Mickey on the cliff conducting the heavens and the sea and the weather in sync with the music. For us, that was an important creative inception point for this project.

GamesBeat: How long have you been working on Fantasia now?

Rigopulos: About two years at this point. The origin of the project is interesting. Coming off the launch and success of Dance Central, there was a lot of creative excitement at the studio about motion control and music and the meeting between the two. We were doing a lot of brainstorming and prototyping about how to combine motion control with music, and in particular with musical creativity, which has been a long-term interest for us. We were actively engaged in development of new music and motion ideas.

It’s a great serendipity that we were approached at that time by Disney. At first, we weren’t terribly receptive, because we don’t usually work with third-party IP. But we took the meeting, and the moment they said “Fantasia,” it was a lightbulb going on for us. That was a perfect brand vessel for the creative experience we were already building. 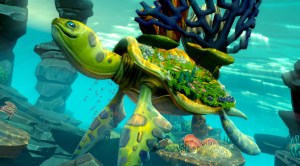 GamesBeat: Did you start changing what you had, then, because of all the things you could bring into it from Fantasia?

Rigopulos: The particular thing that Fantasia brought to the table was a narrative conceit – the player as The Sorcerer’s Apprentice, inhabiting a world where music and magic were one. Manipulation of the natural world through magic and the manipulation of music itself were woven into a single act. That was a narrative conceit that we found really powerful. It was a great framework for what we were trying to achieve.

GamesBeat: Disney: Fantasia is coming out 2014. Is it safe to say you have next-generation technology you’re going to be able to take advantage of?

Rigopulos: Yeah, that’s safe to say. We will be releasing the game initially on both the Xbox 360 and Xbox One.

GamesBeat: You must be excited about what you can do with Kinect now.

Rigopulos: Already, with the existing Kinect, we’re able to do a tremendous amount. There’s a surprising degree of precision in the original Kinect that we’re taking advantage of in new ways. With the new Kinect in the Xbox One, it takes it to a whole new level. There’s all manner of ways in which we’re looking to exploit that in the service of creative expression on the part of the player.

GamesBeat: The interesting thing to me is that music always seems to require reinvention in the gaming space. You have things like Call of Duty that can stay the same every year, but music goes through these cycles where something booms, and then it gives way to something else. Rock Band and Guitar Hero gave way to the dance games. Are you accustomed to that at this point?

Rigopulos: Yeah, by necessity. I think it parallels the evolution of music itself. Music is undergoing constant reinvention. At Harmonix we see it as our creative responsibility to be constantly reinventing music play. So of course, what a music game meant in the Rock Band days was instrumental performance simulation. Subsequent to that, it was all about dance, which connects people to music and to each other in a primal way. Now, with Fantasia, we’re going after musical creativity, trying to bring physical creative expression with music into gaming for the first time. 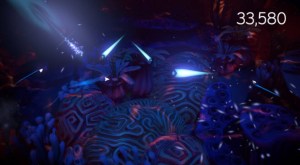 GamesBeat: Does it seem like fans reach a limit, where they embrace something as a trend for a while and then at some point they give it up?

Rigopulos: Players have an appetite for innovation. There will be a period of time where something new comes along and they’ll happily devour that. Then they’re thirsty for something new. We feel pretty excited about the level of innovation that we’re bringing to the table.

GamesBeat: What are some of the things that give it this touch of innovation, then?

Rigopulos: The most important, as I’ve already touched on, is the creative element. First off all, there’s the fusion of physical motion and musical interaction. Beyond the dance games, this isn’t something that’s been done before. We’re giving players several axes of meaningful musical expression through the gameplay. That’s been a long-time dream of ours, and it’s never been done successfully in music games.

GamesBeat: It seems like there’s a larger trend, too, where people are not as satisfied being consumers anymore, passive participants in a game. They want to be creators. That sounds like something obvious or easy to do, but I take it that figuring out exactly what you want the user to create is the hard part.

Rigopulos: The challenge is in fusing musical creativity with gameplay. Gameplay is all about objective criteria for success and failure. Creativity, on some level, is about letting people do things that are their own, that are uniquely theirs. Those two forces are often working in opposition, so part of the design challenge was to reconcile those forces. 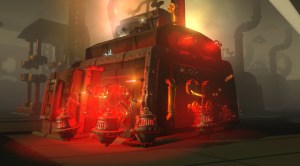 GamesBeat: Is there some other element that we haven’t seen yet that is going to be more directly targeting what fans of the film might want?

Rigopulos: I’d say maybe the narrative. I’m not sure how much of that was exposed, but all of the gameplay that we’ve talked about – the performance gameplay, the more explorative, discovery gameplay – this is all set in the framework of an exciting narrative that drives the whole thing forward. It’s that narrative layer that will most directly reference the original film, particularly The Sorcerer’s Apprentice vignette.

GamesBeat: The development cycle seems like a long one. What’s the tough part about pulling all of this together?

Rigopulos: For us, the toughest aspect of this is that from a gameplay standpoint, it was a blank canvas. We have experiential ambitions related to motion and creativity and the fusion of music and image and all of these things that were all supported by the original film, but other than those high-level ambitions, we were creating new gameplay out of thin air. There was a very long period of creative incubation where we were doing experiment after experiment, before we finally settled on the right mix of gameplay and creative ingredients that could cohere into something compelling. When we finally arrived at that, it was incredibly exciting.

GamesBeat: What element of competition do you want to preserve from your past music games?

Rigopulos: One layer to the gameplay is what we call Gesture Beat Match. For example, in previous games like Rock Band, you have a prescribed set of rhythmic patterns that you need to play on your controller. In this case, we mapped that basic idea into physical gesture. There are gestures that the players need to perform in rhythmic sync with the music, and they’re scored based on their ability to do that. And then of course there are all the creative layers that are then built on top of that.

GamesBeat: I suppose it’s harder to give a score to something that’s purely creative.

Rigopulos: That’s right. One man’s trash is another man’s treasure. It’s an inherent attribute of creation.

GamesBeat: Was it difficult in some ways to leave behind things like Rock Band or Dance Central?

Rigopulos: On some level, of course, it’s always difficult to leave one creative work behind and move on to the next one. On another level, it’s exciting to be doing fundamentally new things. I’ll also say that we don’t view Rock Band as something that’s being left behind. It’s something we’ll return to at the right point in time and reimagine it as appropriate for its time. 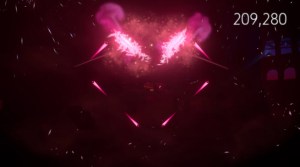 GamesBeat: One thing that’s carrying over are tracks. You have 25 tracks described in this first press release. Is that where it bears some similarity to something like Rock Band?

GamesBeat: It sounds like that also satisfies some of the Fantasia fans if you have a lot of classical music.

Rigopulos: There will be a lot of many kinds of music in the game. We have an incredibly diverse soundtrack. But for classical music fans, yes, we’ll have significant classical elements.

GamesBeat: How did you look at Disney from the outside as it approached you and started working with you? It has gone through a lot of transformations in the games business. It’s not doing as many traditional console video games as they used to.

Rigopulos: They’ve been wonderful collaborators on the project. It’s a real privilege, actually. At the onset, they opened up the Disney archives to us, which are an unbelievable resource. We’ve seen all these ingredients that have gone into the creative process for these classic films over the decades, particularly Fantasia. Having that as a resource has been amazing.

One of the more exciting aspects for us was looking at some of Walt’s notes about what he was trying to creatively accomplish in the film. It’s interesting to be able to think about it as an artistic work on a different level than just looking at the art assets themselves.