GamesBeat: It’s interesting how it’s been one of these cult favorites over such a long time.

Rigopulos: It’s amazing, yeah. Fantasia has been a persistent fixture in culture for so long. It’s gone through multiple waves of revival, including the counterculture revival in the ’60s. It has incredible legs as a piece of art. For us it’s a real privilege to be able to make an addition to it. 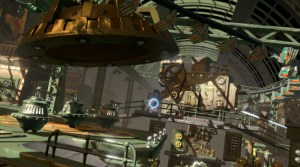 GamesBeat: This seems like a platform, in that you could release new DLC or new songs for something like this. Is it a platform in the same way Rock Band was, or are there some new elements to it? Disney Infinity also seems like another interesting look at how to create a platform.

Rigopulos: The interesting thing is that when Walt originally conceived Fantasia the feature film, he saw it as a serial work that would be continually updated and rereleased. As an art object, it would evolve over time, alongside the evolution of culture. So in a certain sense, even back in 1939, Walt had conceived of the Fantasia film as a sort of platform. It was prescient in a lot of ways.

In terms of the game, yes, we very much view it as a platform. We have big ambitions for expansion content – music, obviously, but also other game elements beyond just music.

GamesBeat: It seems like this kind of thing would be natural for a Disney theme park.

GamesBeat: Got any unannounced plans you can talk about?

Rigopulos: Harmonix’s first revenue as a company, back in 1997 or something, came from developing a theme park exhibit for Disney. I think it’s still at Epcot Center to this day. Also, when we first started working with the creative teams at Disney, they took us to Disneyland and we spent an evening looking at the World of Color exhibit, which was also a great inspiration piece for this project. Personally, I’d love to see a Fantasia-themed exhibit as an adjunct to this game. I think it would be perfect. And it would sell a few units of the game for us. [Laughs]

Even in the context of this project, there has been some brainstorming with Disney about a theme-park adaptation of this project. It’s a dream at this point, not a plan, but it’s something I think would be pretty cool. 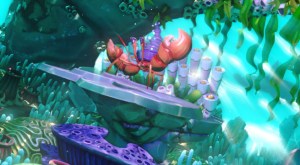 GamesBeat: Is this bringing you into contact with any interesting new musical artists?

Rigopulos: We’re not able to say too much at this point about some of the major artists we’re involved with on the soundtrack, but yeah, it’s an impressive and diverse group of artists we’re collaborating with. A lot of them love Fantasia, actually. When we approach them with the project, sometimes they’re initially skeptical, but then the moment we tell them what the property is that we’re working with, they’re immediately intrigued.

GamesBeat: Are there any other things you guys will show or talk about at E3 that are different from what we’ve been seeing on the road show?

Rigopulos: We’re planning on showing it on Xbox One at the show. We’ll be on the new platform with the new camera. We’ll have deeper interactions in the factory setting that you saw. There were a couple of things that we had turned off because they’re still in development. The look and feel of a lot of the performance gameplay have continued to go through some pretty massive day-to-day iteration. The art looks better and better. The frame rate gets better. It’s way more playable and more enjoyable from a rhythmic standpoint. It’s not necessarily completely new content – we’ll be adding a few interactions – but there’s definitely a lot more polish that will make the game look different from what you saw even a couple of weeks ago.

GamesBeat: It sounds like the potential audience for this could be a lot different from some of the past ones, or a lot bigger. Rock Band might have a bit more of a narrow appeal.

Rigopulos: We do think the appeal of this experience is incredibly broad. It’s a collaborative, creative experience that a family can have together, both parents and kids. We also think that core gamers who have an appetite for design innovation will be drawn to it. It’s just like music itself – it has a very broad appeal.