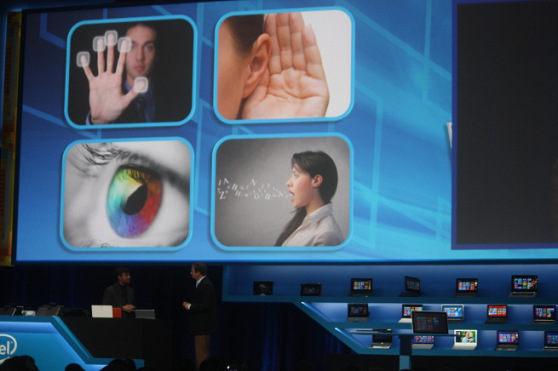 Intel Capital has created a $100 million fund to finance perceptual computing projects, or those that use more senses to interact with computing devices. Perceptual computing includes gesture recognition using 3D depth cameras, which send signals into a room and measure the time it takes to bounce back in order to map the room’s 3D space.

Intel Capital is making a strategic investment so that the PC can thrive. Intel’s venture capital arm typically funds next-generation technologies so that it can keep pumping up demand for its computer chips. Perceptual computing includes eye-tracking, voice recognition, face recognition, and gesture controls. The hope is that it will reinvigorate demand for PCs, which has been sagging as tablets take off.

The company made the announcement at the Computex computer trade show in Taiwan, where Intel executive Tom Kilroy gave a keynote speech. The vision is to integrate “human-like sensing technology into devices, ultimately delivering more natural, intuitive, and immersive computing experiences.”

Intel will make the investments over the next two or three years. The company will look at touch apps, imaging, gesture, voice, emotion sensing, and biometrics.

“Devices with human-like senses – the ability to see, hear and feel much like people do – has long been a subject of science fiction but is now within reach given recent innovations in compute power and camera technology,” said Arvind Sodhani, the president of Intel Capital and Intel executive vice president. “This new fund will invest in start-ups and companies enabling these experiences, helping them with the business development support, global business network and technology expertise needed to scale for worldwide use.”

Intel announced the perceptual computing initiative last year at its Intel Developer Forum event. Since then, the company’s Perceptual Computing Software Developer Kit (SDK) has been downloaded more than 10,000 times. It also launched a contest for the best perceptual computing applications. Intel showed off a new gesture camera from Creative, the Senz3D, which will go on sale in the third quarter. Intel also said it will integrate 3D depth camera technology into Intel-based devices in the second half of 2014.

Intel last created a large fund to fuel ultrabook investments a couple of years ago. The company has invested a significant portion of the $300 million Ultrabook Fund. Since 1991, Intel Capital has invested more than $10.8 billion across 1,284 companies in 54 countries.