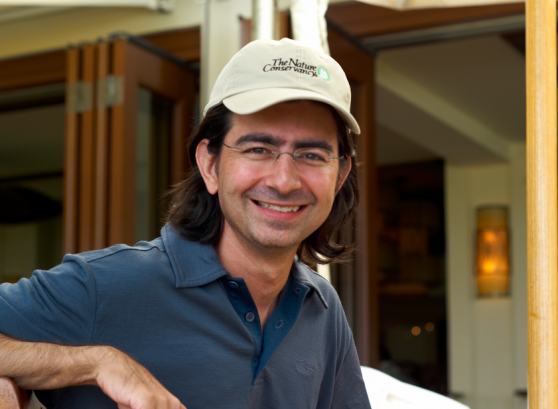 This post is brought to you by Jaguar. Experience F-TYPE. As always, VentureBeat is adamant about maintaining editorial objectivity.

How do you define success in entrepreneurship?

Most people would argue money — a blockbuster IPO or acquisition. Some might say the ultimate success is to become an investor to seed other companies’ ascents. And then there’s impact — the amount your work has shaped or changed the world.

While others have had more success in one of these categories, one man stands out as scoring high in all three: Pierre Omidyar. Best known as the founder and chairman of eBay, he weathered the dot-bust of the late ’90s to become an entrepreneurial force for change (along with his wife, Pam) through his socially-driven investment firm, Omidyar Network.

Becoming a billionaire at age 31 when eBay IPO’d, Omidyar has definitely been monetarily successful. Now he’s putting those dollars to work, investing in nonprofits, for-profits, and public policies that aim to make the world a better place.

Where did his will to succeed at such an early age come from? And what anchored his interest in social returns over making more and more money? You can argue that it started with his upbringing.

Pierre Omidyar is the son of very smart, driven people. He was born in Paris to Iranian immigrants. His mother was a doctoral students in linguistics at the Sorbonne, and his father a surgeon. Their parents sent them to France to succeed, and they worked hard to fulfill that promise. To give Pierre even more opportunities, they moved to the U.S. and settled in Washington D. C. when he was six.

He went to great schools — including the Potomac School, where his interest in computers first began. With access to the right resources, he was able to write his first computer program at age 14 — it cataloged books for the school library. And after graduating from St. Andrew’s Episcopal School in Maryland, he went on to study computer science at Tufts (now the beneficiary of a $100 million contribution).

Like many CS majors, Omidyar’s first job after school was at an established software company — in this case, Claris, a subsidiary of Apple Computer that developed software for Macintosh. In 1988, four years after Macintosh was introduced to the world, this was a pretty prestigious first job. He even helped author popular software package MacDraw.

This role gave him the confidence and the skills to try something of his own. In 1991, he co-founded a small company called Ink Development. Its focus was creating software for pen-based operating systems, including the Go Corporation’s PenPoint OS. And when it started developing for the Windows for Pen Computing and Magic Cap platforms, it got some attention.

Three years after rebranding as eShop to create early e-commerce software, the company was acquired by Microsoft. The technology became the cornerstone of the Microsoft Merchant Server, the company’s first solution for growing business-to-consumer Internet sales. Omidyar’s interest in e-commerce stemmed from there — as well as his knack for choosing the right business at the right time.

By the time eShop’s sale to Microsoft was final in 1996, a 28-year-old Omidyar was already writing the initial computer code for person-to-person auctions online — even while he worked at early PDA developer General Magic. Testing the waters in September 1995, he launched an early version called Auction Web — a site that would eventually become auction-based e-commerce juggernaut eBay.

It was rumored that Omidyar launched Auction Web because his girlfriend at the time wanted to meet and exchange goods with fellow Pez dispenser collectors. While this was uncovered to be some particularly cute and kitschy PR, the site’s early popularity is largely attributable to strange and varied collectibles.

Indeed, the first item sold on the site wasn’t a Pez dispenser, but rather a broken laser pointer. Apparently, the buyer was collecting broken laser pointers. Soon, the site was a hub of consumer-to-consumer sales of massive variety. Omidyar was fascinated by what people had and were willing to sell or swap. And when he introduced a small fee, between 25 cents and $2 for listing items on the site, traffic only continued to explode.

A year later, Omidyar was working on Auction Web full time, having had his salary quickly exceeded by the site’s profits. Already, he had processed 250,000 auctions. A year after that, in 1997, that number had spiked to 2 million. And by the middle of that year, the site was processing 800,000 auctions a day. Omidyar was on a roll, and things started to get more serious.

To grow as aggressively as he wanted, he knew several things were going to have to take place: a mature rebranding, smart advertising, and the right leadership. All of these things were achieved in quick succession, as he renamed the company eBay (a shortened version of his first choice, EchoBay), and launched widespread marketing campaigns. He also signed a licensing deal making it possible for people to buy and sell airline tickets online.

The last step was to stock his company with the right people. That started with full-time employee number one, Jeff Skoll. A Stanford Business School graduate, Skoll had been working on Internet projects for publishing company Knight-Ridder. Joining the already profitable eBay seemed like a no-brainer, and Skoll’s first task was to write a formal business plan (one that guided the company to ultimate success).

Then, in 1998, Meg Whitman came aboard as President and CEO, as Omidyar assumed a chairman role, still involved but relinquishing primary leadership. Whitman was a good choice, groomed at other distinct brands like DreamWorks, Procter & Gamble, and Hasbro. Under her leadership between 1998 and 2008, eBay grew from 30 employees and $4 million in annual revenue to over 15,000 employees and $8 billion in yearly revenue.

Shortly after she came aboard, eBay went public, selling 178 million shares for about $4.5 billion. On its first day out, the share price came close to tripling, making Omidyar and his early employees instant billionaires.

Even so, Omidyar stayed very involved with the direction of the company. And some of his decisions made a big difference in its early years. Following the IPO, the site was plagued with outage issues that shook consumer confidence, but Omidyar spearheaded the effort to reach out to them directly. In one instance, he directed the company to make 10,000 phone calls to its top users to assure them that everything was being done to improve the site’s service record.

He was also instrumental in the 2002 decision for eBay to purchase payment processing company PayPal — now the standard for making purchases and sending money online. This enabled the company to branch out, even moving away from the auction model to accommodate fixed-price and “best offer” sales. They also opened up to third-party developers to create applications supplementing eBay’s services.

Good decision-making is mandatory for successful entrepreneurs. Often more challenging than developing the technology itself, navigating the landscape of investors, feature launches, and user feedback requires patience and a certain amount of prescience. From his early days at eShop through the acquisition of PayPal, Omidyar seemed to feel the vibrations in the market and see what was coming down the road. At first it was e-commerce, and then electronic payments.

Now he’s putting that foresight to use in an entirely different way. In 2004, he established Omidyar Network with his wife, Pam. Structured much like a traditional investment firm, it provides funding to for-profit and nonprofit organizations across many sectors. The one thing these portfolio organizations have in common: positively shaping the world.

A lot of these choices aren’t traditionally philanthropic. Rather, they’re anticipating and harnessing the forces that will make a difference in the world years or even decades from now.

There may be a world of difference between DonorsChoose, an online charity that makes it easy for people to make school donations, and Wikia, a wiki-hosting service. But both harness the power of crowds of people to make vital funding and information available to the people who need it most. For this innovative approach to making an impact, Omidyar Network received the Sumazi award for “Startup Most Likely to Change the World” at the TechCrunch Disrupt conference.

So when you ask what has enabled Pierre Omidyar to become not just one of the most successful entrepreneurs in Silicon Valley, but in history, his ability to predict what people want and will use distinguished him from his peers. He was much like Steve Jobs in that way.

But now, in this new act of his career, it’s clear there’s been another quality behind his success: the desire and ability to see what will help people.

eBay wouldn’t have succeeded without Omidyar’s commitment to creating a flawless user experience and introducing new features that would help people do things they didn’t even know they needed — from buying Tiffany lamps to airline tickets. Now, he’s turning that creative, empathetic talent to shape the future of philanthropy.

It’ll be interesting to see what he does next.