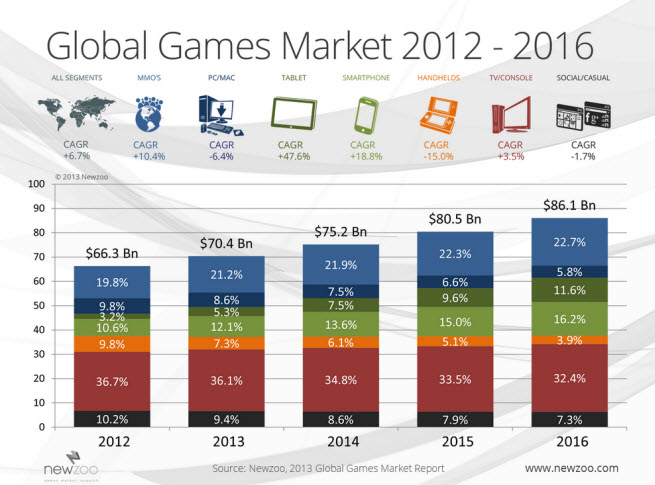 The global games market is expected to grow at a compound annual growth rate of 6.7 percent to $86.1 billion by 2016, according to market researcher Newzoo. But there will be plenty of shifting happening within the market as smartphone/tablet games grow strong and console games lose market share.

Amsterdam-based Newzoo says the games market — including all territories and platforms — will hit $70.4 billion in revenues in 2013, up 6 percent from a year ago. Much of that growth comes in Asia Pacific and Latin America, where growth will hit 11 percent. North America and Europe will grow a modest amount. This year, the fastest-growing category is smartphones/tablets, which will be up 35 percent to $12.3 billion.

Massively multiplayer online games will grow at a compound annual growth rate of 10.4 percent through 2016. Computer games will be 35.8 percent of the market, or $30.9 billion, in 2016. Next-generation console games are expected to grow revenue at a global growth rate of 3.5 percent, but they will lose market share overall. Asia Pacific will have 37.9 percent of the global market share by  2016.

“Especially in the weeks leading up to E3 we are witnessing a large number of global market estimates and projections from various sources. In principle it is not hard to make high-level market projections,” said Newzoo CEO Peter Warman in a statement. “The devil is in the detail and the real challenge is twofold. First of all, projections should be based on primary data sources across all business models and involving all KPIs in the most granular way possible. This is very complex and is the reason we spent 12 months developing the model behind our global data report. The second challenge is to slice and present the data in a way that is useful to the industry and investors. This requires specific industry knowledge and hands-on experience working with global game companies on a daily basis”.

Newzoo cofounder and CFO Thijs Hagoort said that other estimates typically too much emphasis on traditional console and PC gaming and underestimate the new business models and screens.