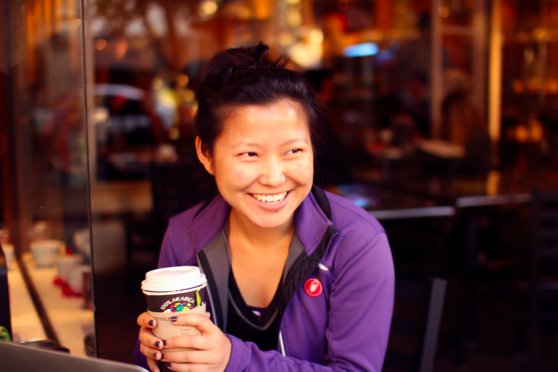 The heroine in Suzanne Xie’s first interactive game for kids is no damsel in distress.

Xie [above] settled on a fearless, adventure-seeking purple panda with a big group of friends — both male and female — as her lead character in Pan: The Fearless Beribolt. “She’s feisty and not a princess,” said Xie, the twentysomething founder and the CEO of its parent company Hullabalu.

The panda protagonist, “Pan,” is an amalgam of Xie, her close friends, and the inspirational women she’s known throughout her life. 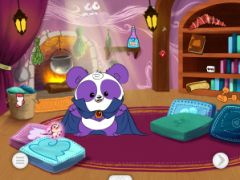 The New Yorker could not have dreamed up Pan at a better time, given the push for more strong female characters in games. Xie was able to convince some high-profile tech investors to support her vision, raising a $1.8 million seed round from YC partner Garry Tan, Reddit cofounder Alexis Ohanian, SV Angel, Rothenberg Ventures, Liberty City Ventures, Time Inc. president Fran Hauser, and more. About half of the funding came through angel network AngelList.

Pan: The Fearless Beribolt debuted today on iTunes for $3.99. Similarly to competitor LaunchPad Toys, Pan’s design is a “constructionist learning framework,” meaning that kids can learn by both doing and creating. It’s ideal for kids between the ages of 3 to 7.

The player can decide when the plot moves forward, so kids feel like an integral part of the game. Text appears alongside narration, which sets the stage for early reading success. The interactive elements are tailored to kids based on their age and reading levels. Just for fun, Pan features a camera booth so kids can take pictures of Pan and save them in the iPad gallery.

One thing parents will like about Pan: It has no purchases for virtual goods.

Parents have plenty of games to choose from, but Xie claims that hers has an edge as the plot was designed for young children in mind (not teens, like Harry Potter). In addition, she spent hours watching kids play on tablets, detecting subtle differences in how they hold the device. Pan’s designed to capture kids’ attention, so she expects it will be a lifesaver on long plane and train rides.

“It’s amazing to watch kids play the game and feel as if they are really in this world,” said Xie.

Above: Xie wants boys and girls to work together on logic problems

In Pan’s world, boys and girls are just friends (no Disney Princess-like pining for the perfect prince), and it’s cool to work on logic and reasoning problems together.

Entrepreneurs like Xie are part of a growing movement in Silicon Valley to set girls on a trajectory so they grow up with an appreciation for science and math. In the past year, women formed toy companies such as Maykah and Goldieblox through highly successful runs on Kickstarter to make playthings not only suitable for girls but also that encouraged a love for math and science.

Research has shown that only about 15 percent of female first-year college students intend to major in STEM subjects (science, technology, engineering, and math). But there is no scientific evidence that girls are any less capable of  mastering these subjects.

But Xie doesn’t consider herself an ed-tech entrepreneur — the mission goes beyond the classroom. “We’re not just teaching kids how to add and subtract,” she said. “It’s educational attendance, it’s an appreciation for story-telling and logic. Really, it’s life-learning.”