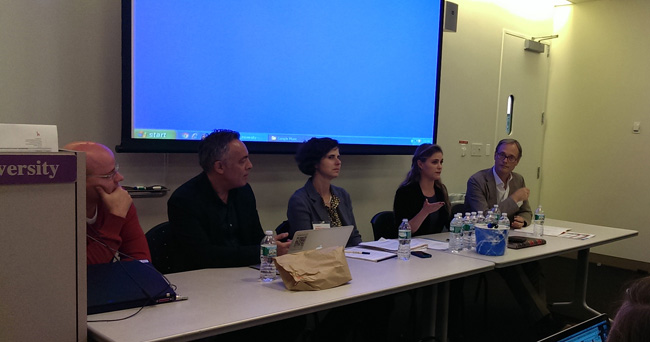 NEW YORK CITY — If we ever really want to solve the problems of cybersecurity, we first have to figure out what we mean by “cybersecurity.”

That’s the argument being made by free software activist Camille François, who says that the word “cybersecurity” suffers from a crisis of identity.

“The problem with ‘cybersecurity’ is that it’s the word that everyone uses. It just means too many things,” François said during a panel discussion at the Personal Democracy Forum in New York City today.

It’s hard to disagree with the assessment — “cybersecurity” really is a catch-all term. When someone breaks into your bank account, it’s a cybersecurity issue. When Chinese hackers steal secrets from the servers of American companies — that’s cybersecurity. When law enforcement demands copies of your Gchats from Google it’s usually because of — you guessed it — cybersecurity.

“Cybersecurity is too vague for us to have a very informed debate about it,” François argues.

This sort of semantic confusion pops up often when you talk about the worlds of online privacy and security, which have the problem of being closely related, but simultaneously very different. “Privacy” itself is a particularly tough word, especially when you ask the question of who, exactly, you are keep your data away from, noted Sharon Bradford Franklin, senior counsel at watchdog group The Constitution Project.

“When you’re talking about what information you’re giving up to the government and private companies. They’re two somewhat separate questions,” she said.

The result, then, is an almost unavoidable confusion of message, especially for the average person. How can activists ever hope to educate the public about online security and privacy issues if they’re not ever fully able to articulate what those issues are?

The issue is especially relevant in light of yesterday’s revelation that the NSA in April ordered Verizon to hand over the call data for its customers. Is that a privacy or security issue? (Answer: It’s both.)

It’s a problematic situation, argues François, who says agencies like the NSA are effectively creating a situation of perpetual “cyberwar” against regular people.

“Cyberwar is when we put our online rights and liberties on hold indefinitely,” she said. “We want people to be secure with how they use their tools. That’s cyberpeace.”