Learn-to-code company Treehouse is today launching a job board that aims to bring new opportunities and income to its student body of 35,000 coders of all kinds.

The jobs come from companies around the globe and include development and design positions, including mobile developers and junior-level developers who might have just gotten their feet wet, so to speak.

While the job board will have a mix of positions at entry and management levels, Treehouse founder Ryan Carson said the new feature speaks to a particular passion of his: making sure that underserved communities can be uplifted by the power of technology.

“From a practical standpoint, the job board is important because ultimately, a job is the learning outcome that many students really want from their education, and nothing completes someone’s education and proves mastery like working day to day in the field they’ve studied,” he said to VentureBeat via email.

“But, we also know that very few things have made our lives better (those of us who work at Treehouse) as working in a field that gives us the ability to channel our creativity, build the kind of life we want, and try to help others. We think more people doing that all over the world, but especially in places like Detroit, is going to be huge.”

The bit about Detroit refers to an ongoing program that began in Detroit, where Treehouse first brought its signature IT curriculum into high schools full of underserved kids.

Later, the startup got funding to take the program on the road to a bunch of other high schools in other towns. At that time, Carson told us that at one school in particular, all the students came from at-risk backgrounds. They were from minority groups, and they didn’t have the luxury of a lot of positive parental interaction. Carson said that after the Treehouse curriculum, around 30 percent to half the students would be immediately job-ready upon high school graduation, making a huge economic and social difference for the students and their families.

“Our goal is that our job board and future job related features make technology jobs as accessible as possible to as many people as possible,” Carson said today. 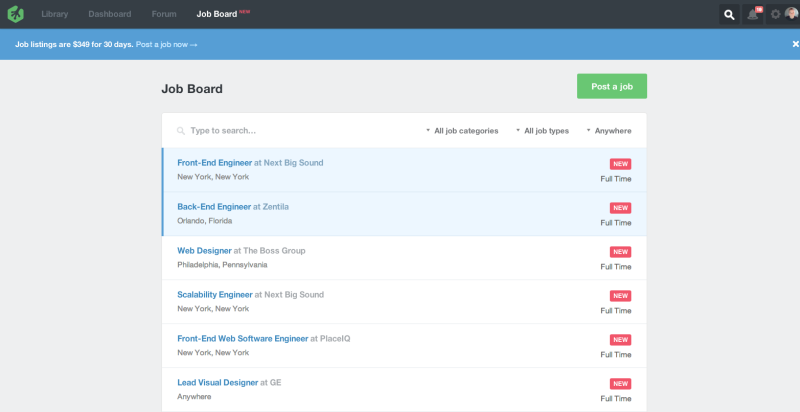 And thanks to the popularity of remote working, the jobs posted via Treehouse’s board stand to impact more than just the handful of students who already live in wealthy, high-tech geographies like Silicon Valley.

“Our company and so many like ours hire a ton of remote workers, and that trend is increasing each year,” Carson said.

“We’re confident that in the future, tech jobs are going to allow people the flexibility to stay in the places that they love and are invested in while working in a position that otherwise wouldn’t have been available to them. We’re hoping that means more people reinvesting in their communities and building a brighter future for those communities.”

A growing roster of companies is participating in the job board already: GE, The Boss Group, Zentila, Oculus Studios, IA Ventures, and Barrel Roll Creative, to name the initial partners.