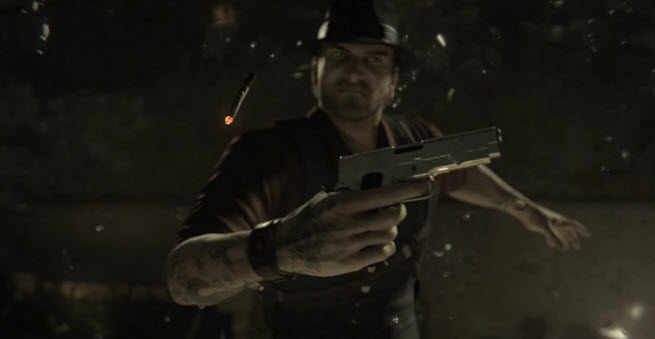 Square Enix has made a big bet on Murdered: Soul Suspect, a very creative game that’s debuting at next week’s E3 trade show. Murdered aims to deliver a double blast of fear and anticipation by blending a detective story with a ghost tale.

I have seen a preview, and it’s one of the most original concepts that I’ve seen in a while. If Square Enix and developer Airtight Games can pull it off, this  could be a riveting example of a movie-like game. And I mean that in a good way. In this risk-averse period of development, creating a new video game franchise is critical to a company’s long-term survival. It is heartening that, at a time of transition for the console game industry, that Square Enix is able to make a big risk on an untested idea like Murdered: Soul Suspect.

Murdered: Soul Suspect is scheduled to debut on next-generation platforms in early 2014.

In Murdered, you play a detective who has been … murdered. As the detective’s ghost, you try to solve your murder. But it’s not quite as easy as it would seem. The ghost of Ronan O’Connor has memory gaps and doesn’t know everything that has happened. In fact, at first, O’Connor doesn’t even know he’s been murdered.

Murdered begins in a movie-like way.

It’s in the middle of the night, and you’re on a street. A fight is going on in an upstairs room in a home in the town of Salem, Mass. A body comes flying out of the second-story window and fires his gun as he falls. Then O’Connor rushes up to the assailant out on the street and tries to grab him. His hand goes right through the hooded man. Then the man picks up the gun and shoots seven bullets into the body on the ground.

We see holes form through O’Connor clothing, with a weird light piercing through the holes. O’Connor realizes that the body on the ground is himself, and he has just died. His own figure evaporates into a white, ghostly form. This is not a Caspar the Friendly Ghost sort of vibe. It’s a scary, noir-like kind of ghost scene. And he tries to chase down the assailant, to no avail. It seems that even ghosts have their limitations.

That opening scene is quite riveting. But then the actual game starts. Here’s where it gets both interesting and perplexing. After all, Murdered is really a new kind of game. It’s a detective story, but it takes place in a kind of limbo world, set in our own physical world. That world is called The Dust, and it is filled with other ghosts and other strange beings. As a ghost, you can see things that others don’t, and you can possess living things to get them to do what you want.

But you have limitations that you have yet to discover. Many homes have been sanctified to ward off evil spirits. Ghosts can’t enter those places unless someone opens a door for them.

“What we’re working toward is something really unique,” said Eric Studer, the senior design producer at Airtight Games, in an interview with GamesBeat. “We want to come up with something clever that no one has seen before.”

In the first gameplay scene, you as O’Connor must find clues about what just happened. But you can’t interact with the physical world anymore. You can’t pick things up or enter certain kinds of places. O’Connor has to listen to the chatter of the cops who show up to investigate. And he has to try to catch the clues that they miss. He can listen in on a conversation and pick up a clue. But he has to wait for another investigator to enter the home where the fight took place before he can do anything. And no, even though he is a ghost, he has no idea who murdered him.

As a ghost, you can see some interesting moments. O’Connor’s younger brother, also a police officer, shows up and promptly slugs the lead investigator. He is touched at the display of emotion from his little brother. On the other hand, he overhears another officer talking disrespectfully about him. Another cop responds, “You don’t know when to quit. He was still a badge, dickhead.”

When O’Connor makes it inside, he finds that he can see other ghosts in the building and can move through walls. He also encounters a kind of demon that tries to devour his soul. He must escape the demon (sometimes by possessing a nearby human) and try to ambush the demon from behind. The ghost can move through walls and such, playing a kind of cat-and-mouse game with the demon. I’m not exactly sure how fun this part of the game is, but it certainly makes you feel hunted as a ghost. You’re not all powerful, and you have to use your wits to escape. Studer said the designers didn’t want to just throw in some mindless combat in the ghost world, but they wanted to do something that required strategy.

“The combat is almost an investigation in itself,” Studer said.

If you stop and talk to ghosts, you’ll find that they have their own unresolved issues. If you help them with their problems, you begin a kind of side quest. The more quests you undertake, the more you learn about Salem and its history. This exploration, Studer said, is a key aspect of the game.

“It’s really going to expand the player’s understanding of what the world is,” Studer said. “But the player’s main quest has a very clear path. Ronan’s instinct in life was to follow his hunches, and that leads him on this path. You can discover what else lies in the Dust. That makes the world more believable.”

As a ghost, you can do things that get the attention of the living, like making objects malfunction. Those interactions will help you solve puzzles later in the game. Once you solve a certain puzzle, it opens up a memory for O’Connor, who sees pieces of the puzzle in the crime scene unfold bit by bit. You learn that the hooded person who murdered you has superhuman strength. (I asked Studer if the killer was Ezio from Assassin’s Creed, and he just laughed).

Square Enix showed just the one location, but there will be others. And they will get more expansive in size as you learn how to play the game. The initial scene is more tightly controlled.

How the team came up with the design

Designing the game has been a challenge. One of the game mechanics is where you have to guess what happened in reconstructing an event. You have to get the sequence of events right in order to solve the puzzle and move on to the next scene. The gameplay resembles the process of elimination that detectives go through in the detective game L.A. Noire.

You’re a detective who deciphers evidence and puts events into chronological order. O’Connor isn’t going to find peace as a ghost until get justice.

“When you design most games, you don’t realize how valuable walls and doors are when you don’t have them anymore,” Studer said. “When you can just walk through anything, how do you build levels as a level designer? How do you control the flow of gameplay and direct the player? It’s such an empowering tool for players, but it’s a challenge to strike the balance between direction and freedom.”

The game has been in the works for a couple of years. A lot of the time was spent doing prototypes of what could be fun.

Studer said that Square Enix came calling to Airtight Games. Square Enix’s creative director, Yosuke Shiokawa, had an idea. What if you had the Bruce Willis character from Die Hard? If he died, wouldn’t he still keep trying to protect his wife? He had also drawn inspiration from the movie Ghost, with Demi Moore and Patrick Swayze, where the two stars try to communicate across the line between death and life. Of course, this isn’t a romantic comedy by any stretch of the imagination.

“That was the kernel that became the story,” Studer said.

Studer said that there is a lot of pressure in coming up with a new IP. At the same time, it is “extremely exciting” to get out of a comfort zone.

“When you work on original IP, you are taken out of that comfort zone,” he said. “It’s scary but can be incredibly rewarding.

Here’s our video interview with Studer.