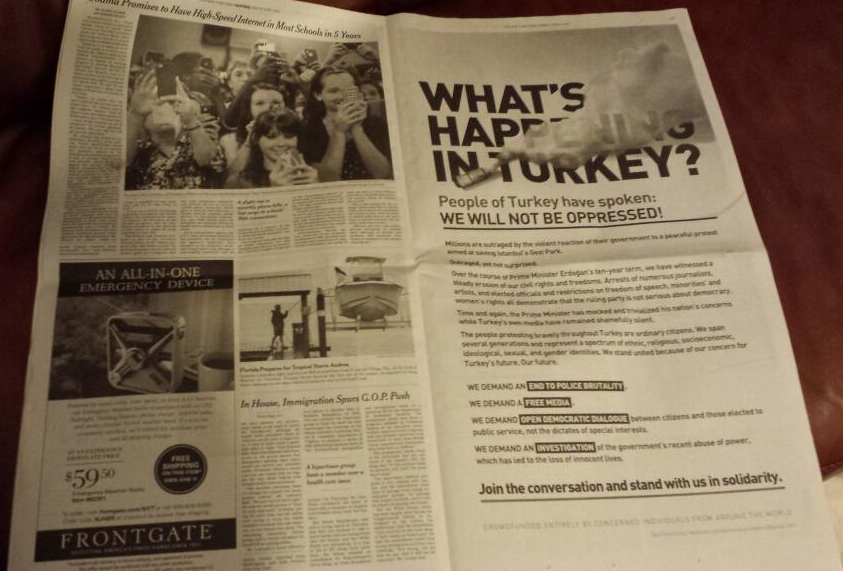 Protestors against Turkey’s government ran a full-page ad in the New York Times today using money from a crowdfunding campaign.

The Indiegogo campaign went live on June 3 and achieved its initial goal of $53,800 in under 24 hours. Now it has attracted $103,282 million from 2,587 funders around the world, supporting efforts to raise awareness about the current political situation in Turkey. Protests broke out in Istanbul last week after the government attempted to bulldoze a park to build a shopping mall and military barracks. The movement quickly turned into a nationwide demonstration of tens of thousands of people protesting the government’s lack of consultation with its citizens, the police’s excessive use of force, and infringement of free speech and the right to assembly.

“Millions are outraged by the violent reaction of their government to a peaceful protest aimed at saving Istanbul’s Gezi Park,” the campaign read. “Over the course of Prime Minister Erdoğan’s ten-year term, we have witnessed a steady erosion of our civil rights and freedoms. Arrests of numerous journalists, artists, and elected officials and restrictions on freedom of speech, minorities’ and women’s rights all demonstrate that the ruling party is not serious about democracy. Time and again, the Prime Minister has mocked and trivialized his nation’s concerns while Turkey’s own media have remained shamefully silent.”

Campaign owners Murat Aktihanoglu, Oltac Unsal, and Duygy Atacan live in New York and are active in the tech community. They watched the protests and violent government response from afar but were unsatisfied with coverage of the situation. They turned to crowdfunding platform Indiegogo to raise money for a prominent ad in the New York Times that would draw media and public attention. The ad demanded an end to police brutality, a free media, open democratic dialogue, and an investigation of the government’s recent abuse of power.

Drafting and editing of the ad’s text was also opened to the crowd to reflect the nature of the campaign — fully inclusive, tech-assisted, and democratic. Furthermore, the owners asked people to provide suggestions for the extra money on community news site Reddit. The most popular response is to fund a professional team to create a documentary summarizing the situation.

Crowdfunding is a powerful phenomenon. Charitable causes, creative endeavors, and businesses have all used platforms like Kickstarter and Indiegogo to get projects off the ground. The approach has fundamentally changed the way people seek exposure and financing and opens up opportunities to people who may not have otherwise had them.

You hear a lot of buzz about the “democratizing” effects of crowdfunding. In this case, it really means democracy.