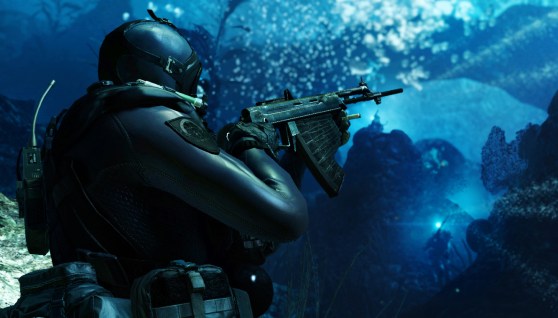 I know exactly what you’re thinking. I thought it, too.

Activision showed us the underwater firefight sequence from their incoming first-person shooter/blockbuster, Call of Duty: Ghosts, at a special pre-E3 event last month. After watching a half-dozen frogmen gunned down with assault rifles in open water, right after the lights came up, I exchanged incredulous looks with a dozen people around me. We were all thinking it: Shooting people with a machine gun in the middle of the ocean pretty much jettisons even a Michael “Armageddon” Bay-like understanding of physics. It simply isn’t possible. After years of excesses, Call of Duty finally jumped the shark.

Except those guns are real, and they really work underwater. Say hello to my little friend, the APS amphibious rifle.

Developed by the Soviet Union back in the early ’70s, the Avtomat Podvodny Spetsialny (APS), or “Special Underwater Assault Rifle,” went into service as the primary weapon for frogmen guarding Mother Russia’s maritime assets. It’s accurate and deadly to a range of about 100 feet, which isn’t far off the upper range of visibility in the open ocean.

Quite a few successors followed the APS — Wired published a history of the underwater arms race back in 2007 — though most are still classified even decades later. The real secret to underwater guns, however, lies in their specialized ammunition.

Firing a gun while submerged is no big deal. A bullet needs oxygen, gunpowder, and an ignition source (the gun itself) to fire, and so long as the gunpowder stays dry inside a shell casing, it contains its own oxidizing agent. The problem happens when that bullet hits the water, which is a much thicker medium to traverse than air. A low-velocity round might make it 8-10 feet before coming to a complete stop. Forget any hope at accuracy. Firing a normal bullet into water pretty much shatters it.

Underwater guns use supercavitating ammunition — in the APS’s case, a steel 5.56 mm bolt in 26-round clips — that creates a gas bubble around the bullet itself to maintain velocity. The rifle barrels are smooth-bored, not rifled like normal guns, so they’re actually less accurate out of the water than in it. Russian frogmen reportedly carried a backup piece for when they hit the beach.

Multi-Environment Ammunition (MEA) like this also comes in armor-piercing and tactical sniper varieties, though an even better “liquid bullet” is supposedly in the works. The current “standard” version can still cut through the tougher parts of scuba gear and make a mess of underwater vehicles. And that’s just what they do in Call of Duty: Ghosts.

Now, I can’t say real underwater guns have a fast rate-of-fire or that the shell casings eject as if they’re still subject to dry-land gravity like those in Ghosts do. I can say that the guns themselves really exist. Call of Duty hasn’t jumped the shark. But it might shoot one full of holes.