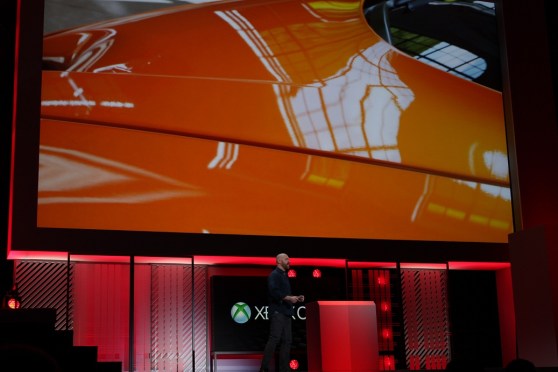 LOS ANGELES — Microsoft just showed off Forza Motorsport 5 at the Xbox briefing at the Electronic Entertainment Expo. And this title not only looks sweet. It has an innovation in “cloud processing,” said Dan Greenawalt, creative director at Turn 10 Studios.

Microsoft doesn’t have a faster box than Sony’s PlayStation 4, according to expert assessments. But it did architect the
box in a way that allows it to tap cloud-based processing in its web-connected data centers, where it has 300,000 servers waiting to do its bidding.

In this case, Greenawalt says the artificial intelligence processing of the race cars has been offloaded to the cloud. As a result, we will see the “end of A.I.,” he said. That means that the “Drivatar” character that mimics your driving patterns will be based in the cloud as a “learning agent.” It means that the car will race smarter, nailing corners when it turns on a track, just like a human driver will.

That’s a tall order, but that’s what Greenawalt promised with Forza Motorsport 5.