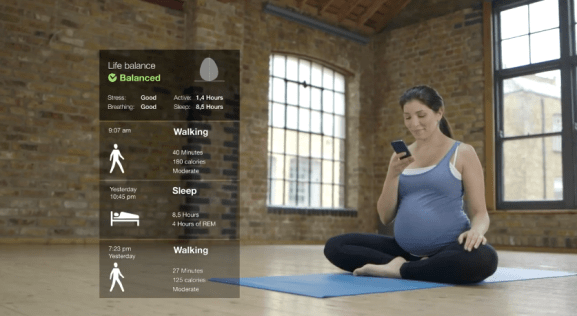 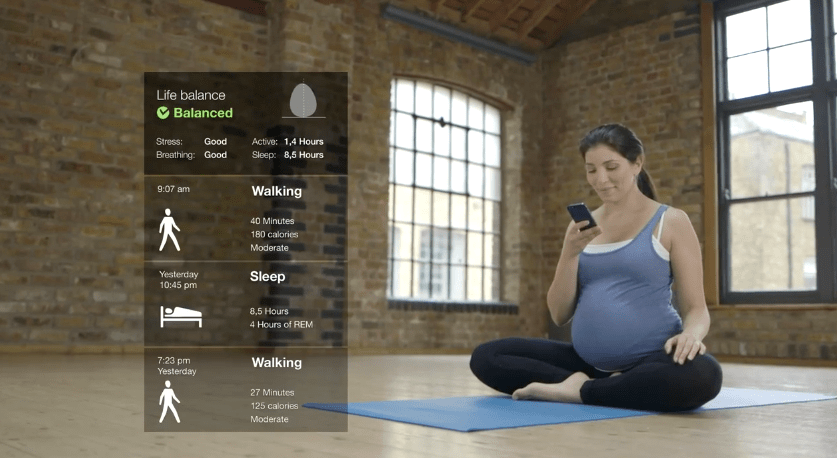 Tracking bracelets like Fibit, Fuelband, and Up are for fitness, measuring steps, motion, and action. Arm straps like BodyMedia also measure heart rate, skin conductivity (how much you’re sweating), and exercise intensity. All of those are important to Montreal-based smart apparel startup OMsignal too, but the company says there’s more to wellness than fitness.

“We think movement is awesome, we’ve worn all the devices,” says CEO Stephane Marceau. “But we’re also trying to measure emotional states. It’s mental and it’s emotional … and we call this ’emotics.'”

OMsignal is doing that, as you might have guessed, by making you one with the shirt. Or bra — your choice.

OMsignal’s T-shirts and bras have the basic tool that every other fitness solution employs: a 3-axis accelerometer to give you motion and steps and estimated calories. But the clothing also measures breathing: respiratory rate and volume. And something truly incredible for a personal fitness device: your ECG. 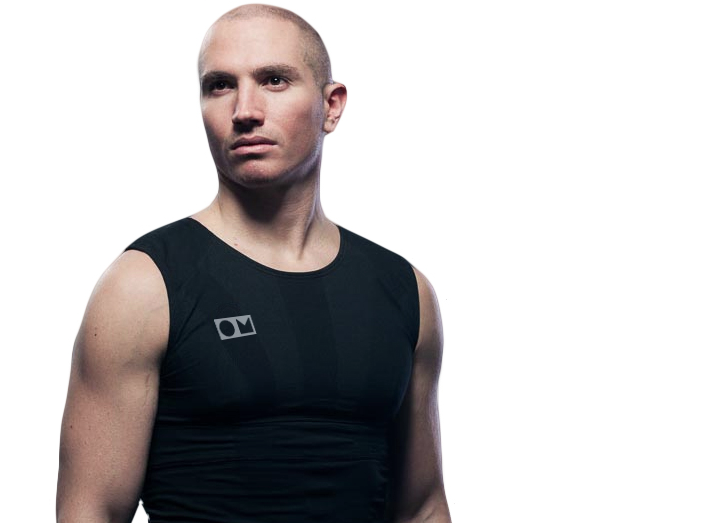 That’s not just heart rate, that’s an actual measurement of the electrical signature of your heart.

“From the ECG we measure heart rate variability, which is pretty meaningful,” Marceau told me. “The difference between arcs is the difference between your heart rate. When it’s long … you’ve got no problems, but when saber-tooth tiger is next to you, they’re fast and regular. There’s 30 years of research correlating stress and exercise, but there’s no tool to measure it in real life.”

OMsignal started to work on a wellness wearable in 2011 after the team members initially designed a fitness bracelet in 2008. The goal was to access a greater body footprint — to get deeper data — and then to extract more meaningful signals and generate more meaningful insights. 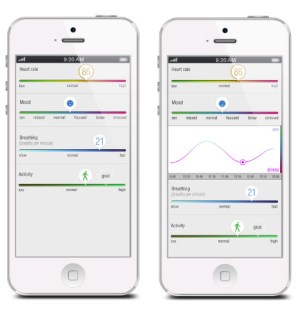 Those insights have a lot to do with stress. CEO Marceau — who’s a high-energy, passionate, excitable person — has been practicing mindful breathing for a long time. With an active, busy lifestyle plus the stresses of a startup, he needs the chill factor, and needs the health benefits.

Especially the benefits of mindful breathing — even when you’re not exercising.

“I’ve been practicing yoga for a long time,” Marceau says. “Focusing on breathing is so helpful — influencing your breathing is one of the few ways to influence your autonomic system, which is a pretty powerful thing.”

Your body’s autonomic system is the mostly subconscious things you do to stay alive: breathing, heart rate, digestion, perspiration, and more. It has a huge impact on your health and wellness, particularly in the area of stress, and is largely impervious to conscious control — at least for those of us who are not Yoga gurus who have practiced controlling our bodies for 20 years.

But breathing can be under our control, and mindful breathing — slow, deep — can have a major health benefit in reducing stress and improving energy.

“With breathing, you control your stress,” says OMsignal’s chief medical officer, Stéphane Borreman — who is not only an emergency room physician but also a mechanical engineer. “Good breathing can make overall better balance in terms of the nervous system.”

All of which means that OMsignal’s apparel doesn’t just count your calories or tally up your steps for the day. It helps you understand how you are feeling, and why … it measures your emotional state.

But not just yours.

The company is working on apps that link you with your loved ones. If your spouse is feeling stressed, you can be notified and can send him or her a comforting text. Or, if a parent is experiencing health issues, you can call for help. Both of which are interesting ways to bring the power of our closest social relationships to bear on the most key issues of our health.

OMsignal is still an early-stage company and has not released a product for sale. The company just closed a $1 million seed round of financing from Real Ventures, Golden Venture Partners, and angel investor David Cohen.

But in preparation for a wider release, and in anticipation of opening up the OMsignal platform for third-party developers, OMsignal is taking a page from Google’s early “Explorer edition” release of Google Glass. One hundred of OMsignal’s body-sending shirts will be sent to life hackers, medical practitioners, and developers.

The shirts are available first; the bras will come second, Marceau says, citing the fact that bras need more design than T-shirts “for some reason.” Pricing, of course, is not yet finalized. And that will be a huge challenge, although the company may look at some means of transferring sensors from shirt to shirt so that you do not have to buy 20 smart shirts to get full sensor coverage, even when your clothing is in the laundry.

In fact, the entire design process has been a challenge.

“We always wondered, with all these fitness wearables, why isn’t arguably the most natural wearable category represented: apparel?” Marceau says. “After spending so much time making this work, we get it.”