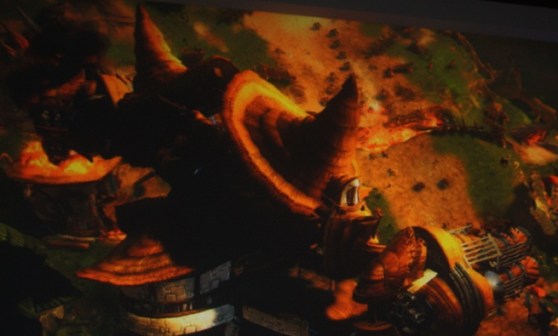 Dave McCarthy of Microsoft Studios and designer Claude Jerome demonstrated how players can build worlds and alter gameplay on the fly. Using the Xbox One and Windows 8, players can share content with anyone on virtually any screen.

Project Spark features Kinect voice functionality, which enables players to speak commands — shaping and constructing mountains, rivers, moats, bridges, textures, and more. They can even set the specific time of day. Players use what looks like a magic paintbrush to alter the landscape in real time as they imagine colorful, lush worlds at “the touch of a button.”

This new world-builder also enables players to add in objects and assign them behaviors. Microsoft showed how a simple rock could become animate by manipulating its “brain.” It hopped around and followed the player, who transformed it into a Rock Fighter and ultimately a Rock Mech.

McCarthy and Jerome stormed the grassy battlefield, assisting each other in combat. The onscreen characters launched fireballs and even manipulated the ground so that one could ride around on a cliff of earth as if it were an ocean wave. They could decide which types of enemies would attack their base, such as flying goblins and trolls.

Microsoft encourages gamers to think of Project Spark as both a blank canvas for creation and storytelling and as a way to build on and “remix” existing user-made content. You can play and share together.