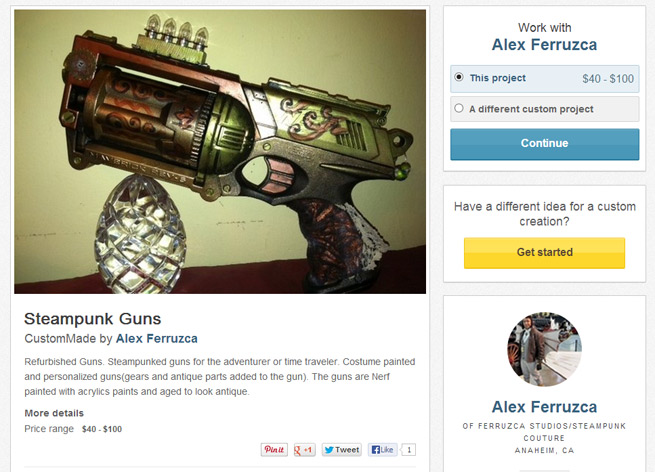 Custom-made goods marketplace CustomMade has raised $18 million in new funding with an aim to grow further and connect more makers and buyers who crave one-of-a-kind items.

Cambridge, Mass.-based CustomMade separates itself from other two-sided marketplaces — namely handmade goods king Etsy — by connecting buyers and makers with the option that the maker will customize the project to suit to buyer’s tastes. In the product page above, for example, you could buy a homemade “streampunk gun” or have the seller customize it for your needs, like making it work for costume. CustomMade currently has a network of more than 12,000 professional makers.

“When we launched CustomMade, we wanted to tap a vein of demand for products that have a deeper meaning for both the buyers and the makers of those products,” CustomMade CEO Mike Salguero said in a statement. “As we see the marketplace for our buyers and makers’ projects steadily grow, we have redoubled our commitment to that vision.”

The new round was led by returning investor Google Ventures and new investor Atlas Venture, with participation from Schooner Capital, Next View Ventures, First Round Capital, and Launch Capital.

Including the new funding, CustomMade has raised $24 million since 2011. CustomMade says it has “doubled in size and revenues” in the past six months. The company was founded in 1996.