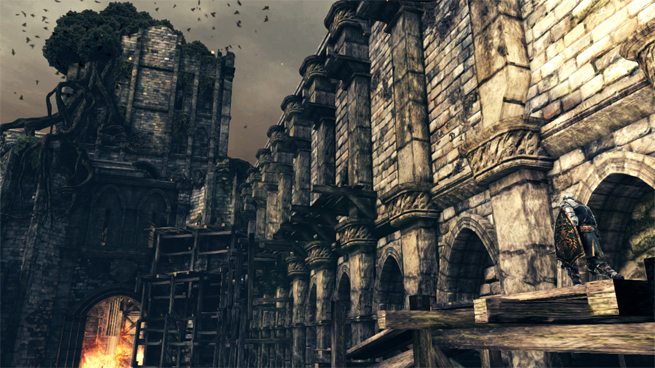 LOS ANGELES — Fear not, Dark Souls fans. Publisher Namco Bandai is assuring everyone that the sequel to developer From Software’s brutal action role-playing game will be just as difficult and inscrutable as its predecessor despite previous comments from its director.

I will follow the same concept as Dark Souls, but there were a lot of hidden story elements that some players may not have caught before, and I’m hoping to make some of that a little bit more clear or directly expressed to the player as well — not just in the story but messaging. A lot of elements were very subtle in Dark Souls, and that was something that was characteristic to Dark Souls. But I personally am the sort of person who likes to be more direct instead of subtle, so I think that part of me will [result in] a difference [for] players when they pick up Dark Souls II. It will be more straightforward and more understandable.

His comments concerned some Dark Souls fans who worried that the series would lose those elements (crushing difficulty, mysterious game mechanics, exploration, and a sense of accomplishment) that made it a sleeper hit that sold more than 2.3 million copies worldwide. But Brian Hong, the director of strategic and digital marketing for Namco Bandai, recently tried to put those fears to rest.

“This game, when it comes out, it’s going to ruthlessly beat the crap out of everyone,” he told GamesBeat during the Electronic Entertainment Expo in Los Angeles. “It will not be easy. There will be no invincible mode. There will be no easy mode. This game will be one mode, and that’s just viciously hard.”

Hong added Namco Bandai understands that enigmatic features, like Covenants, were an important part of Dark Souls, and those will continue to be important in the sequel. “I think the essence of the way the story that’s told and how people experience the game — Covenants and everything else — is kind of one of the hallmarks of the game.”