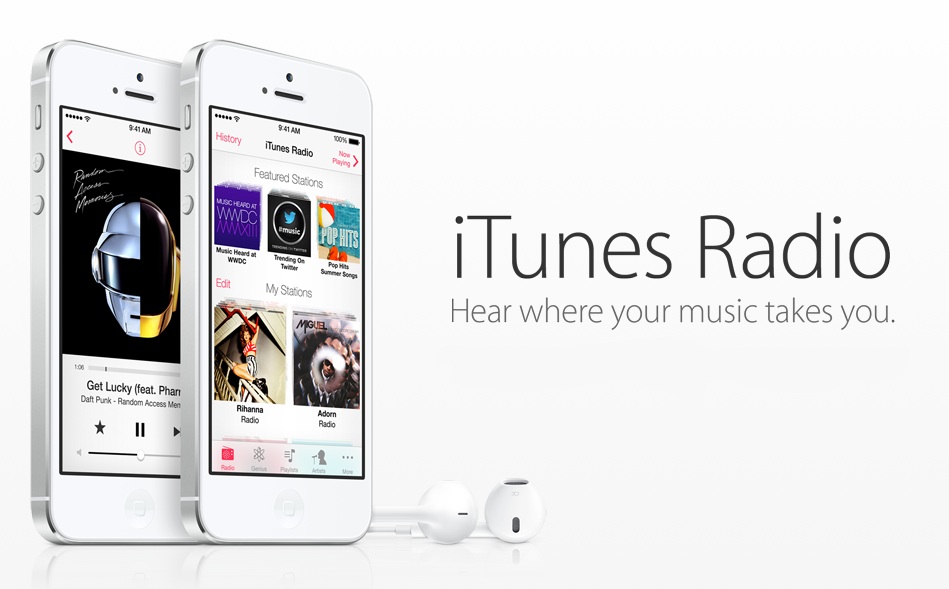 Given Apple’s position as the largest seller of digital music and producer of the most popular mobile devices, the company’s decision to launch its own Internet radio service makes a lot of sense. Other companies in the smart radio space, however, don’t seem nervous about their latest competitor.

Take for instance Pandora, which is the leader in Internet Radio, with over 70 million active monthly users in the U.S. alone. Upon hearing the news about Apple’s new iTunes Radio, Pandora’s stock price actually rose slightly (even though it’s now slightly down). This could have something to do with Apple not entirely focused on taking away the audio advertising market, especially when it comes to local ads, which Pandora has targeted specifically. Still, others like Stitcher, which uses Apple’s iAds platform for display ads, welcome Apple’s entrance into the space.

iTunes Radio is of course a “Pandora Plus” streaming music service that was announced yesterday during Apple’s Worldwide Developers Conference keynote. The service allows you to create custom radio stations from artists or songs within your iTunes library of purchased music, which is altered whenever you like or dislike a song that plays on the station. The service itself is somewhere in between Pandora and Google’s new Google Play Music All Access. It’s available across all Apple devices and is offered as an ad-supported free service to everyone, or ad-free to those who have signed up for Apple’s iTunes Match service.

Below is Pandora’s official statement about iTunes Radio, followed by statements from others in the industry, including Slacker, TuneIn, and Stitcher.

Apple’s new feature is an evolution of their iTunes offering to bring it on par with other streaming music services that have added radio into their feature sets. We have spent the last 13 years singularly focused on redefining radio and benefit from unrivaled intellectual property, deep experience in delivering personalized playlists, and ubiquitous product availability across every platform. We make it effortless for our more than 200 million registered users to connect with the music they love anytime, anywhere.

Apple finally jumping into the streaming music space validates the work we’ve been doing at Slacker since 2010, offering anytime, anywhere access to the world’s music library on any device. … Apple creates great products, but unless you’re in the Apple ecosystem you’re out of luck. Walled gardens don’t benefit listeners, and Slacker believes in the importance of giving users true freedom to access their content, whether they’re on  iOS, Android, Windows, a smart TV, Xbox or in-car infotainment system. Slacker also takes a uniquely human approach to content programming, mixing in news from ABC, ESPN sports, and updates from The Weather Channel for uniquely personalized entertainment that goes well beyond music.

We welcome Apple’s entry in to the music streaming space. Apple’s announcement, coming shortly after Google announced they are also entering the music streaming space, sets the stage for a real bloodbath in the making. Tech titans like Google and Apple are now going head to head with Pandora and Spotify, all fighting for top position. We at TuneIn think Apple’s entry into music streaming is a good thing. Anytime an innovative player like Apple enters an industry, it’s a good thing for consumers. It means all the other players in the space will continue to innovate quickly in order to keep their competitive edge. TuneIn has been innovating for years in bringing the world’s radio to people, for free. Just as innovation on the radio side is good for consumers, innovation on the personal music collection side is good for consumers.

We are not worried about iRadio becoming a threat to TuneIn. People will always crave radio. All of this mislabeling of the term “radio” by players in the personal music collection space is so misleading. Personalized Radio, Internet Radio, On-Demand Radio, everyone is trying to emulate radio. But there’s no replacement for the real thing. Hundreds or even thousands of songs on shuffle is not radio; they will never replace the human curator who is able to connect on a real level with people. Furthermore, all of these so-called “radio” services only offer music. They’re missing the rich offering radio brings for sports, news, talk, and podcasts. TuneIn offers all of that.

We’re excited about iRadio – as it’s music focused, and we’re talk focused, we see it as complementary to what we are doing. We’re always engaged with Apple to find ways to work together and could potentially even see augmenting iRadio down the road with talk radio content from Stitcher. We also already leverage iAd within our app so the potential for using iAd for new audio ads is a great fit for what we are doing.