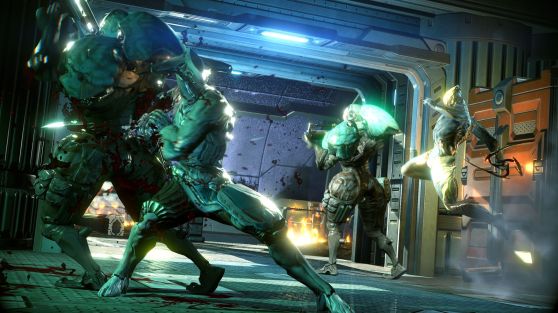 LOS ANGELES — Digital Extremes’ free-to-play online multiplayer action game, Warframe, was recently announced for the PlayStation 4. On display at this week’s E3, it looks on par with its PC iteration, currently in open beta. Creative Director Steve Sinclair told GamesBeat that the team only received its PS4 dev kits just three months prior to the public unveiling.

Sinclair praised the PS4 for its power and ease of development, and he pointed to the playable Warframe demo as proof of both. As previously reported, Warframe on PC felt like it needed to be played with a controller, and now it will be with the PS4 version. Digital Extremes has added touchscreen functionality for quickly using special abilities as well as having the announcer communicate with the player through the controller’s speakers.

Warframe will launch aside the PS4 later this year, and Digital Extremes says it plans to pump it full of as much variety and content before and after release.