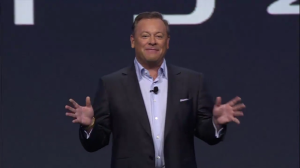 GamesBeat: Taking the publisher’s point of view, it’s easy enough to see why you might not like used games, because obviously, you don’t see a direct percentage of that sale. Microsoft is obviously trying to find a technological solution for that. Have you tried a business solution for that, where you negotiate with retailers and try to get a percentage of those used game sales?

Guillemot: We haven’t negotiated anything. We’re watching for the moment. Manufacturers very often define these sorts of policies, and as publishers we try to follow them. In the past, they’ve shown that they can take good care of the industry. We’ll let them do what they think is right. We can influence them. When we see them going somewhere we don’t want, we try to push a bit for things that we think are good for publishers and consumers.

GamesBeat: A few years ago, you brought Rayman back with great success. Earlier this year, you decided to postpone the latest entry to get in line with the launch of the new platforms. Do you still stand behind that decision? There seemed to be some bad PR, some bad feeling surrounding that choice at the time.

Guillemot: I’d probably participate more in that discussion. What happened was that we saw the Wii U was not going to sell enough of those games. The game is going to be fantastic, and we didn’t want those creators to wind up in a position where even after making a fantastic game, they didn’t sell well enough. We decided that we had to come out on enough machines that players can try it out on any one that they have, and give more time to both improve the game on the Wii U and create versions for the other consoles.

I think it was the right decision for gamers and for the team. My role is to make sure that the team is happy with the quality of the work they do and the reach they can have. The quality is there now, because they had more time. They’ve expanded the possibilities of the game. It’s much bigger content-wise. We have new bosses in key levels and so on. The experience is much more complete. I think it will be one of the best games we’ve ever done.

Sometimes we have to go against the urge to get to market too fast. We have to make sure we give enough time and resources to our creators to they can reach the potential in their games. This time, they were very close to excellence, but not quite there.

GamesBeat: Can you tell us more about Beyond Good & Evil? There was some sort of teaser page up today, some image.

Guillemot: That wasn’t meant to be a tease. It was just part of our promotion in the run-up to E3 – homaging some of the characters from our past. I think that was maybe misinterpreted.

I think the first game was exceptional, and people remember the experience they had, so they would like to see it again. We had a period where we had a demo that went out before it was quite ready, so everybody saw something that appealed to them. That’s why I think they keep expecting something. But I can’t say much more than that.

GamesBeat: You’ve been open about your belief that an earlier debut for the next-generation consoles would have been good for the industry. At the same time, the Assassin’s Creed franchise grew every year on the current generation of hardware. Do you think it really would have done us that much good?

Guillemot: First of all, I’m happy they’re coming now. Each time a new generation arrives, the market grows very quickly. They waited, but they took in a lot of new innovations from the market. We think this will give this the ability to create a high level of quality again. We have some time to wait. We’re still in good shape. We’ve used the time to invest in the past few years, so we’re ready. That said, if the generation after this didn’t take another eight years, I wouldn’t mind.

GamesBeat: Are you certain that his generation will see that kind of continued growth for the console market, with so many hardcore gamers on the PC now and the increasing ease of distribution there?

Guillemot: It’s a challenge. The answer to that challenge is quality. If we manage to create great experiences that are stable and easy to play for everybody, and that the systems themselves are more stable than the PC, we’ll still be able to provide a better experience than the PC. Hopefully we’ll be able to pull some of those guys back. Likewise, hopefully we’ll be able to pull in some of the people who got into gaming through tablets and mobile, and who now want more.

GamesBeat: How would you define the best length of a console cycle?

Guillemot: Our engineers and artists usually master the potential of a console in three to four years. After that, we don’t have much room to surprise people. We can increase the size of our games and try to do other things to differentiate ourselves, but when we change machines, we have all sorts of possibilities that give us the chance to innovate further.

Also, around a transition, consumers and retailers are more open to new kinds of games. When we have a new machine, we tell our teams to go for whatever they want. They have the opportunity to try new things, because we know the market is more likely to bite. At the end of the cycle, people may say they want new stuff, but they don’t buy it very often. They have all the games they want from familiar franchises, and they go to those first. At the beginning of a generation, it’s the opposite. People go for something that’s new and innovative first, to established brands second.

GamesBeat: What can you say about the price of next-gen games? We’ve heard rumors of an increase to as much as 75 euros from some sources.

Guillemot: You may see increases here or there, but altogether I think prices will be the same. The expectation is that because those games can last longer, we can get more money for that experience. If we manage to deliver a longer experience, people will buy more downloadable content, more things in the game.

GamesBeat: New technology is providing you with more opportunities and possibilities in game development, but that also means you have to invest more money in research and the like. When do you think your budgeting reaches a tipping point in relation to price? There has to eventually be a threshold beyond which you can’t keep spending.

Guillemot: That’s a good question. What we saw all through the last generation is that we could find enough customers to justify increasing our budgets. I think it will be the same this time. We’ll keep extending our reach. Each generation has seen us be able to draw more and more revenue from the games we create. Last time, we increased the price by $10, which gave us the opportunity to increase our budgets. This time we’ll do more digital distribution. That will bring in more revenue and allow us to do extra content. We don’t necessarily expect more revenue on the front end, but through better distribution systems and techniques like seamless gaming, you’ll be able to get more hours of gameplay for the same cost.

GamesBeat: What do you think about the success of multiplayer online battle arena games like League of Legends?

Guillemot: The interesting thing about that genre is that it provides a stage for people. If you’re good, you can progress and be recognized by lots of other gamers. I think we’ll be able to do that on PC and on console as well, because eSports are going to be developing in both places. The competition is on, and we’ll be trying to bring something that can be interesting enough to pull players away from the hits in the genre.

GamesBeat: What’s your view on what’s happening lately with mobile games and the intersection of the game and toy markets? Those are both fast-growing areas.

Guillemot: First of all, we love the fact that mobile has come in, because it’s giving a chance to people who have never played before. Thanks to the interface, it’s a lot more accessible. Nintendo took a first step with the Wiimote, where people got into it because it was easy to play. Apple came after that and gave us touch controls, which went even further. What we think is that if we can give these people an easy method of access, we’ll be able to convert a part of those customers to playing on consoles or using a mobile component of a game that runs on consoles.

That’s the positive part. On the other side, we’re investing in the mobile business to create products for that market directly. In a way, it’s the new mass-market segment. Some kinds of games there are interesting, but they only appeal to a certain part of the market. We’ll soon have two businesses. If we an immerse you, if we can allow you to live a different life, it’s not the same as playing something like Clash of Clans – which is a fantastic game, but after a while it’s still a bit repetitive.

As for Skylanders, it’s a fantastic idea. We’re working in that direction as well, with products that will take advantage of Kinect. I think we’ll be doing that more and more. We’ll be trying to get a share of that business. The basic idea of combining something physical with something virtual is very strong – it’s a way to get into a fantasy world, but at the same time keep a part of your reality with you. I can see it continuing to grow, so long as the games themselves continue to be of high quality.