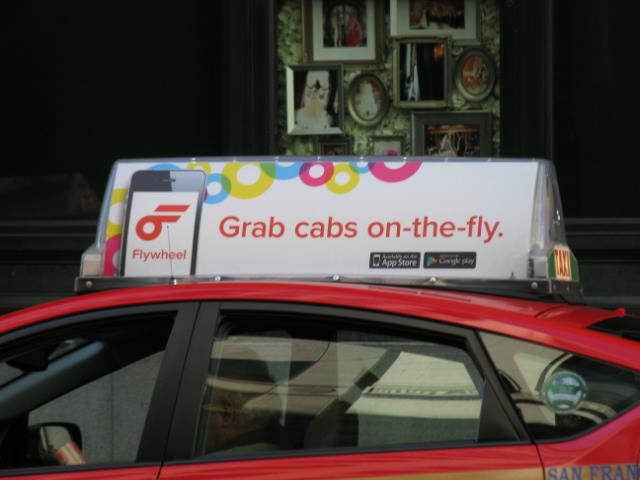 While ride-sharing startups are changing the cab industry from the outside, Flywheel is taking it on from within.

Flywheel 4.0 for iOS has a new EasyPay feature. Riders use it to pay from their smartphone rather than paying with cash or a credit card. The company also added rating drivers, and they have a good incentive to earn high ratings: more fares. New Foursquare integration also means you can call a cab to a specific location without knowing the street address.

These new capabilities give regular cabs the same benefits and conveniences as e-hailing and ride-sharing services like Uber, Hailo, SideCar, and Lyft. These companies all offer smartphone apps for calling cabs to your location (and track the cars’ progress) as well as a rating system that ensure quality and seamless digital payments. Consumers have responded well to this approach, and despite legal battles, these startups are continuing their expansion. Flywheel’s approach is to trick out traditional taxi cabs with these rider-friendly features so they can keep their business while also increasing efficiency and cutting down on costs.

“Most city dwellers want to get fast, reliable, and safe rides to wherever they are going,” said CEO Steve Humphreys in an interview with VentureBeat. “Ninety-nine percent of all paid-rides in the U.S. still go through taxis, but they can be difficult from a reliability and easy-of-payment standpoint. Taxis exist, in some form, in virtually every city in the world. Our vision is to create a more consistently reliable, convenient, and cost-effective paid-ride experience anywhere. We believe the technical and consumer improvements engendered by the Flywheel app are critical to urban progress.”

Flywheel is essentially trying to move an old, stagnant, cash-based business online and adapt it to a mobile world that improves operations for taxis and the experience for consumers.

“Paid transportation is going through major, tectonic shifts,” Humphreys said. “External disruptors like Uber are forcing change at every level by cutting out much of the infrastructure that has been built up over the past two centuries. Flywheel is leveraging technology to help taxi fleets and drivers ward off the threat by these ride-sharing companies and, more specifically, non-trained and regulated, community drivers.

Transportation startups (like the ones mentioned above) present a significant threat to traditional taxi companies (and the regulators that oversee them). They continue to raise money, enter new markets, and hire drivers, and they are gaining increasingly large shares of the market. Humphreys said that rivals are trying to re-create the entire taxi infrastructure one car, one driver at a time, whereas Flywheel is giving existing fleets and drivers tools to remain competitive.

Flywheel has over 2,500 regulated taxi cabs in its fleet and revenues have gone up fivefold since the beginning of 2013. The company also has list of dozens of fleets around the country waiting to join.

It was founded in 2010 as Cabulous and rebranded as Flywheel in December. It is backed by $8 million from Shasta Ventures, Rockport Capital, Sandhill Angels, and Band of Angels.