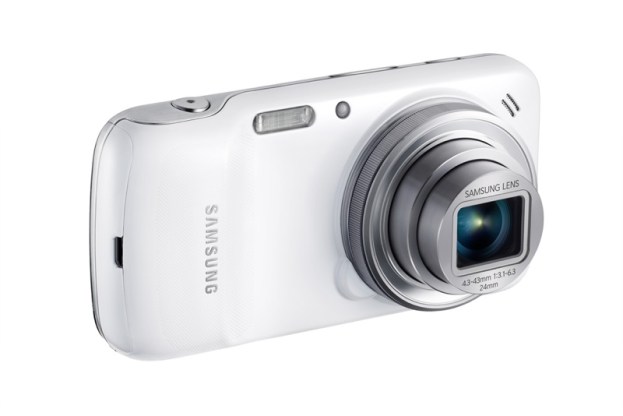 Samsung isn’t slowing down with its niche Galaxy S4 variants: Next up is the Galaxy S4 Zoom, which basically looks like Samsung shoved a huge camera lens on its recently announced Galaxy S4 Mini.

The S4 Zoom sports a 16-megapixel camera with a 10x optical zoom. Even better, there’s built-in optical stabilization, which should make it easier to take photos in low light and video without too much shakiness. Only camera geeks need apply though, as the S4 Zoom only packs in mid-range specs like a 4.3-inch screen and a 1.5 gigahertz dual-core processor.

In many ways, the S4 Zoom looks like an evolution of Samsung’s Galaxy Camera from last year. But where that device was clearly a camera first (it also ran Android and had cellular access), the S4 Zoom is aiming to replace your smartphone. It’s around twice as thick as the Galaxy S4, but that’s to be expected given its long zoom lens.

Samsung has also put together some interesting features to help the S4 Zoom juggle its dual phone and camera identities. For example, you’ll be able to twist the phone’s zoom ring during a call to take a quick photo and send it to the person on the line. The zoom ring also gives you instant access to camera features, and not surprisingly, it’ll be the way you control the zoom levels on the phone.

Like the Galaxy Note lineup and the recently announced Galaxy S4 Active, Samsung is using this device to dabble in a slightly more specific smartphone market. Not everyone will need a thick smartphone with a decent camera lens, but for those who do there aren’t many options on the market outside of the S4 Zoom.

We’re also hearing that Nokia is gearing up to show off a 41 megapixel “EOS” Windows Phone, which likely won’t offer a huge zoom, but will rely on that high resolution to let users crop photos without losing much detail (like the 808 PureView). It’s definitely going to be an interesting year in smartphones for camera geeks.