LOS ANGELES — Konami’s Pro Evolution Soccer (PES) is like a famous footballer who hasn’t been able to sustain his early career brilliance. The franchise endeared itself to many footy fans with genre-redefining gameplay. But recent iterations have stuck to an aging formula, failing to impress the greater interactive-soccer community. This year’s release hopes to regain the series’ previous form with flashy moves and a shiny new jersey to match. Along with a slew of control tweaks, PES 2014 — coming later this year to Xbox 360, PlayStation 3, and PC — features the Konami-tested-Metal-Gear approved Fox Engine, giving the game a whole new level of graphical fidelity. I had the chance to play the title and speak with some of its key developers at the 2013 Electronic Entertainment Expo (E3).

“We have developed a different system on top [of the Fox Engine] to make it more football-specific,” senior producer Naoya Hatsumi stated through translator Akane Oyagi. “[Fox Engine] has enabled us to have more options and more detailed presentation.” 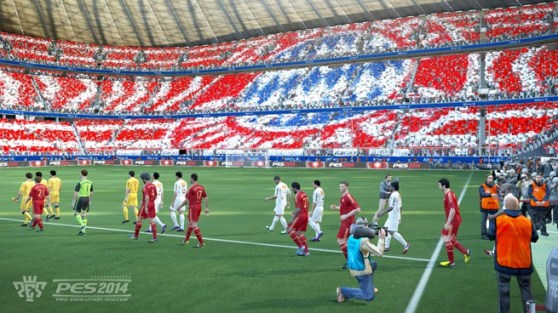 I saw these new enhancements firsthand as I played a demo match between recently crowned European champions Bayern Munich and Brazilian stalwarts Santos F.C. As the athletes walked onto the field, Munich fans created an elaborate mosaic of their club’s crest, spanning the entire diameter of the arena. Player models appeared more detailed, and I noticed small touches like the sun reflecting off the ball and players’ boots.

“[The engine] executes the emotions of the players for each situation. … The characteristics of each stadium are re-created to their detail. … Each blade of grass … are completely recreated as well,” Hatsumi said.

The enhancements are not all cosmetic. PES 2014 also boasts multiple gameplay additions.

“The player’s weight shift, his barycenter [center of gravity], and the ball can be controlled on separate levels,” Oyagi mentioned at the beginning of the presentation. “This leads to more freedom and precision in control, positioning, attacking, blocking, contact, and delaying.”

Unfortunately, these mechanics made the game feel more sluggish. My footballers seemed to react a millisecond too late, and I had difficulty acclimating to the stilted action on the pitch. Passing didn’t feel as crisp and responsive as I’d like, and I couldn’t stitch together the types of triangulations needed to create scoring opportunities.

Regardless, PES 14 clearly provides a more authentic experience than its recent predecessors, but I’ll have to go through a few more derbies before I can say whether the franchise is back to its goal-scoring former self.