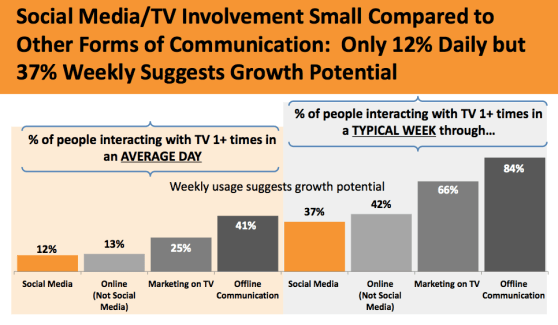 Social media’s impact on television viewing is small compared to traditional marketing and communications, but it has the potential to grow quickly, according to new findings from a study conducted by the Council for Research Excellence (CRE).

“There has been a lot of buzz about the relationship between social media usage and TV consumption, but until now there has not been a lot of thorough analysis,” said Beth Rockwood, the chair of CRE’s social media committee in a press release.

“As was our objective, this study has helped us gain insights about the increased role of social media in television viewing and the impact that has on consumer behaviors. It also has given us a better understanding of how measurement of consumer behaviors can be improved as well as the characteristics of the ‘Super Connecters,’ the most active and influential users of social media,” she said.

A formal presentation of the findings took place at the Advertising Research Foundation’s Audience Measurement 8.0 Conference held earlier this week. More detailed findings will be presented at an event on June 25.