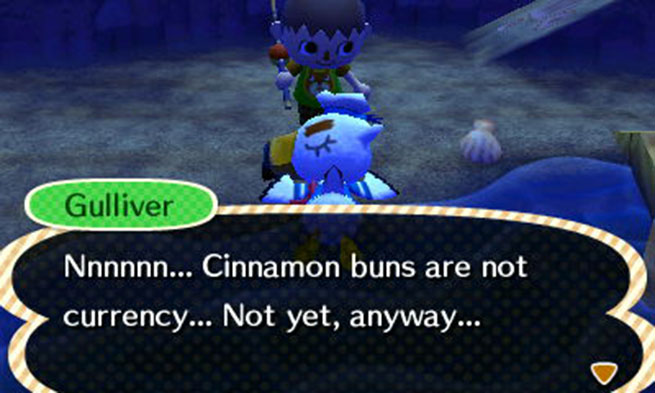 LOS ANGELES — Animal Crossing is the anti-free-to-play game. That’s the main argument in our positive review for Animal Crossing: New Leaf for the 3DS. Nintendo, however, is open to making its beloved casual series free with microtransactions.

“I think the main thing that we need to think about before even considering doing something like that is to determine what we’re going to make available from the beginning,” Animal Crossing lead designer Katsuya Eguchi told GamesBeat through a translator. “I think that’s key in deciding whether we do something like that. If I find a business model that works, however — that works for Nintendo and the end-user — then I can’t say that [free-to-play] is something we wouldn’t consider.”

Eguchi, who has never even heard of FarmVille, does enjoy some free-to-play games himself. He is currently playing Dots: A Game About Connecting on his iPhone. He has even purchased microtransactions in the mobile title.

The designer notes that the audience that loves Animal Crossing comprises many of the same people that love casual free-to-play titles on their phones.

“When you look at our main audience in Japan, they are definitely that audience that has smartphones,” said Eguchi. “[They are] women in their late teens and early 20s. They are certainly playing free-to-play games on their smartphone.”

If Eguchi and Nintendo do decide to make a free Animal Crossing with in-game purchases, it’s probably still a long way off. The company only just released Animal Crossing: New Leaf for the 3DS on Sunday.