GamesBeat: Is it in the final stage, then? Hardware and the software that goes with it?

Uhrman: Yep. Hardware and software are ready for launch. Ouya is never going to be final. We’re always going to ask for feedback from gamers and developers and use it to continue to make Ouya better. But we’re really excited about the product we’re delivering. The controller feels great. The content is wonderful. It’s a lot of fun to play.

GamesBeat: How many games are you at now?

Uhrman: We have more than 135 games and more than 16,000 developers that have an intention to bring games to Ouya. When we talked back at the unveiling, it was 8,000 developers. Developers are really beginning to embrace this. Everything from triple-A developers – we just announced Sega bringing some of the Sonic series to Ouya – to newcomers. We have a father and son team demoing a game. The 8-year-old son built a game for Ouya, and they’re showing it off. We’re the only platform that allows that to happen.

GamesBeat: Are there some more alliances like that coming as well?

If you saw the old UI, you can tell now that we present a lot more content at a glance. We can be much more descriptive about the category names. We have our first third-party curator today, our friend Brian Fargo [of InXile Entertainment], but we’ll have more before launch. If you create your list of the top 10 games on Ouya, you can be on Ouya as a curator. This is one of the ways we’re supporting the early backers of the Kickstarter. We have a special channel for them.

One thing that’s been really surprising: We have games from all different genres, but the genre that’s really blowing up is local multiplayer. We call it couch gaming. The fact that we don’t tell them the type of game to build, or if they have to have a single-player tutorial, or how the multiplayer has to be built, has really inspired developers to not only bring games back to the living room, but also bring their friends back to the living room. We have a ton of games – TowerFall, BombSquad, ChronoBlade – that are local multiplayer games, and most of them are exclusive to Ouya.

GamesBeat: Any observations about the other new consoles? They’ve all showed their cards now.

Uhrman: I think they look like incredibly powerful devices. They’re incredibly expensive. The games will look amazing. But it’s more than processing power and graphics. Great games are about having fun. Great games are about getting people into them as soon as possible. Great games can come from anyone. We allow any developer to bring games to the big screen. I think we’ll have some of the most innovative, creative exclusive games compared to any console on the market.

GamesBeat: The used games flap was telling in some ways, as far as where they stand on consumer rights. 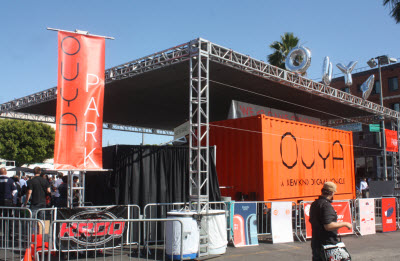 Uhrman: Yeah. Every game on Ouya is free to try. That’s only rule for developers, that the game must be free to try. Then they can monetize it any way they want. We completely lower the barrier of entry for a trial.

GamesBeat: The BlueStacks guys did something interesting, getting iOS games ported over to their Android platform and then putting them on TV. That’s an interesting hack.

Uhrman: It’s about providing a great community for gamers and developers to interact with each other, where Ouya as a company is built to listen to our audience and continue to improve and develop based on the feedback we get. They are involved in Ouya. We’re not a team of 30. We’re a team of more than 70,000 or 100,000, because we constantly seek their feedback. They feel like they’re a part of this and we’re doing this together. We started with an idea and they caused a revolution. They believed that there was room in the market for something new. They believe that we’re doing this together. We’re always going to listen to their feedback and incorporate it.

GamesBeat: Did you get all your preorders filled?

Uhrman: Yeah. Preorders are selling exceptionally well. Since E3 started, we rose to the top 25 preorders on Amazon. Regardless of whatever’s going on inside, Ouya is being heard and people are excited about it. We’re hoping to satisfy all the demand we’re seeing for launch. We’ll be ready to refresh units as quickly as we can.

GamesBeat: It’s good to have revenue coming in the door.