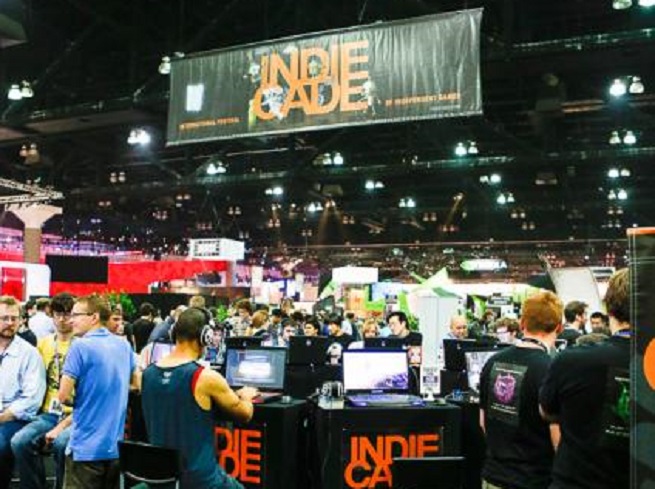 Indie games got a lot of love last week at the 2013 Electronic Entertainment Expo (E3) in Los Angeles. For three days, people crowded the IndieCade booth to see quirky and creative titles like Guns of Icarus Online, 6180: The Moon, and Legend of Dungeon. Sony announced it will allow indies to self-publish their own titles on the upcoming PlayStation 4 console before showcasing many of those games in their massive PlayStation booth. And Microsoft — well, Microsoft had Lococycle and Below. I think.

Here at GamesBeat, we love indie games as well. That’s why we’ve created this list of the top five to come out of E3 that you’ll want to keep your eyes on.

Supergiant Games gained the industry’s attention in 2011 with the lovely and poignant Bastion. Now, the studio looks ready to wow once again with Transistor, a science-fiction-themed action role-playing/turn-based strategy game. Whiskey-soaked voice actor Logan Cunningham returns in the role of narrator (he did the same for Bastion), but this time he’s a sentient sword, the eponymous Transistor, and he’s in the hands of a silent woman called Red. After escaping an assassination attempt, Red must travel through a futuristic city to piece together the mystery of the Transistor and track down its former owners. Beautiful and atmospheric, with gameplay that’s both layered and easy to grasp, Transistor could be Supergiant’s finest work yet.

Contrast made an immediate impression on me when I saw it in the PlayStation booth at E3. Set in the 1920s, a time period not often represented in gaming, it mixes a gorgeous 3D world with shadowy 2D platforming. Both whimsical and dark, it tells the story of two best friends, an 8-year-old girl named Didi and an older girl named Dawn. It’s as if Limbo and BioShock Infinite had a baby while watching Pan’s Labyrinth.

If you happened to hear a lot of yelps and screams coming from the indie section of the PlayStation booth last week, odds are it was a member of the media playing Outlast. The first project from the newly formed development studio, Red Barrels, Outlast is a survival-horror game that forces you to run and hide from the monstrosities inside an abandoned mental facility instead of combating them head-on. Fans of horror movies like REC and The Blair Witch Project will appreciate its “found footage” style, while those who enjoy the niche hit Mirror’s Edge will like its parkour gameplay. Fans of a good night’s sleep, however, might want to steer clear.

I’m a fan of Jasper Byrne’s psychological survival-horror game Lone Survivor (this PC game is on Steam), but I think the upcoming PlayStation Vita version might be even better. It looks great on Sony’s handheld. Its retro, pixelated graphics are well-suited to a smaller screen. The Vita version will include trophies, Cross-Buy and Cross-Play support, as well as 19 new items, new dialogue with all NPCs, two extensive new sidequests, and a brand-new ending, featuring an exclusive piece of music. More unsettling than most recent triple-A horror titles, Lone Survivor feels like a love letter to Silent Hill and Twin Peaks. It’s a bizarre, mysterious, and disturbing experience that will stick with you long after you’ve stopped playing.

Unlike Outlast and Lone Survivor, Ray’s the Dead is a light-hearted horror game. You play as Ray, a newly arisen zombie searching for answers about why he was killed, why he was resurrected, and why a giant light bulb is stuck to his head. A blend of stealth, strategy, and puzzle-solving, Ray’s the Dead has you amass a zombie army and guide it around town, wrecking havoc on the inhabitants along the way. It’s basically Pikmin with zombies. What’s not to like?