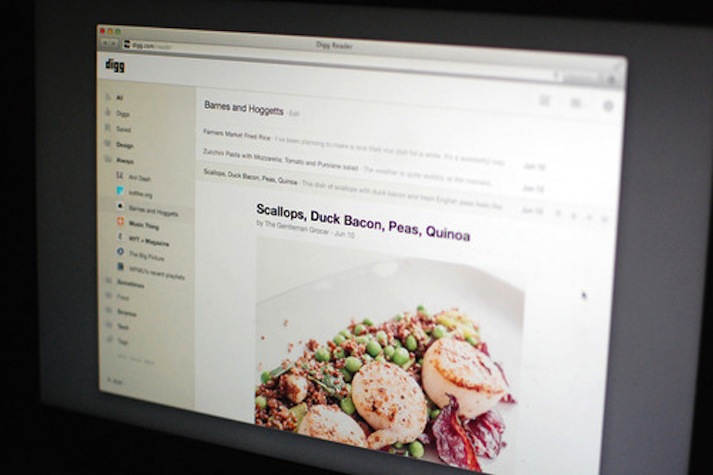 A beta version of news-curation service Digg’s long-awaited RSS reader is scheduled to arrive next week, the team announced on its blog today. For many, this will replace the nearly retired Google Reader.

Google Reader was really good at collecting RSS feeds of all your favorite news sites and blog posts as they were published throughout the day. Personally, I found the service to be more than a bit overwhelming, but others (such as my VentureBeat colleagues) were outraged when Google announced it was shutting down the service earlier this year. The Digg team saw this as an opportunity and immediately began working on a successor called Digg Reader, which would compliment its efforts to re-create a curated front page for all the hottest news on the Web. The aim for is to provide all the same RSS aggregation while keeping the experience simple, quick, and easy to navigate.

There are a few key differences in Digg’s business strategy that should ensure it doesn’t have to shut down after you’ve become reliant on it, too. First off, the service will operate as a freemium product, with the best features being offered as  premium service. The team noted that several people said they’d be willing to spend money on a Google Reader product, which is something Digg Reader is exploring. The beta version due out June 26, however, will be free to everyone.

Digg showed off a web version of Digg Reader along with screenshots of an iOS app. The team also promised that an Android version is on the way. Ultimately, the web version is probably the most important right now as Google is planning to shut down Google Reader on July 1. That gives people a pretty small window of opportunity to sign up and migrate all their feeds into Digg Reader.

Digg isn’t the only company hoping to grab Google Reader users. Zite has also bent over backward to revise its own news-reader service, which welcomes but doesn’t cater to Google Reader power users.