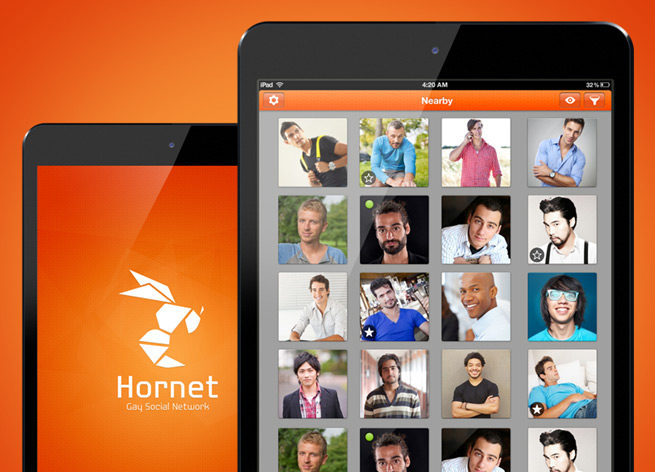 San Francisco-based Hornet launched in January 2012, has seven employees, and has raised about $500,000 in seed funding. It offers social and dating features for “gay, bi, and curious guys” with profiles, messaging, and “stealth mode” for anonymity.

The service has been growing quickly even while facing competition from Grindr, the reigning king of the gay mobile-social space. (Grindr claims to have more than 6 million users.) About a year ago, Hornet had 150,000 users doing 100,000 sessions per day. Now it has 1 million users who have engaged in 178 million sessions.

Hornet chief executive officer Sean Howell told us that the app prides itself on providing a safe space for men to meet each other, but it isn’t a “sleazy” experience.

“The gay space is hyper-competitive, and we’re showing that you can have a less sleazy app and do well, which is a common misconception about the space,” Howell said. “Nearly all of our profiles contain tame face pics as profile pics versus other players out there. … People have much longer chats on our platform versus others.”

Like many other popular mobile services, Hornet has apps for iPhone and Android. Howell said both apps see a lot of traction, but usage patterns are slightly different on each platform. For example, Android users send 22 percent more messages than iOS users, and iOS users send 37 percent more pictures. New York City is the most popular city for iOS users while Hollywood is the most popular city for Android users. App usage is highest before and after work hours.

Next up for the service is the launch of an iPad app, which may happen next week. This move will likely help the brand reach even more users. Howell said many people have been asking for an iPad app for a long time and that they’ve reluctantly had to use the iPhone app on the iPad.

“It will be a better experience for iPad users,” Howell said. “We expect huge lift off it and think there will be thousands and thousands of app downloads in the first week.”