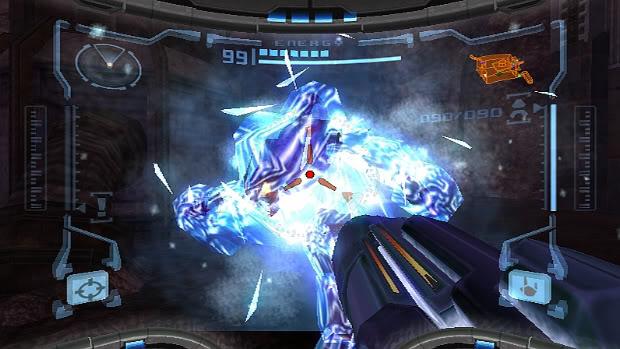 Stay on top of our E3 coverage here

To avoid any trouble with his employer, Kensuke Tanabe wants to make it clear that the following game ideas are his and his alone — and not an official statement from Nintendo. But that doesn’t make them any less fun to think about.

Tanabe is a producer on the upcoming Donkey Kong Country: Tropical Freeze, a 2D platforming sequel to Donkey Kong Country Returns. When Nintendo revealed at the Electronic Entertainment Expo (E3) last week that Retro Studios was working on Tropical Freeze for the Wii U, the announcement came as a shock to some hardcore fans. They had hoped that the developer was working on another installment in the Metroid series (it previously worked on Metroid Prime [above]), an iconic Nintendo franchise that features the heroine Samus Aran blasting away aliens with her arm cannon.

Retro president Michael Kelbaugh has already said multiple times why it chose to make Donkey Kong over any other game. So instead of asking him that same question, we tasked Kelbaugh, Tanabe, and Nintendo project leader Risa Tabata to figure out, hypothetically, how a Metroid game would play on a Wii U with the GamePad controller.

But that’s not all. Tanabe later comes up with another idea that’s so crazy it just has to work. 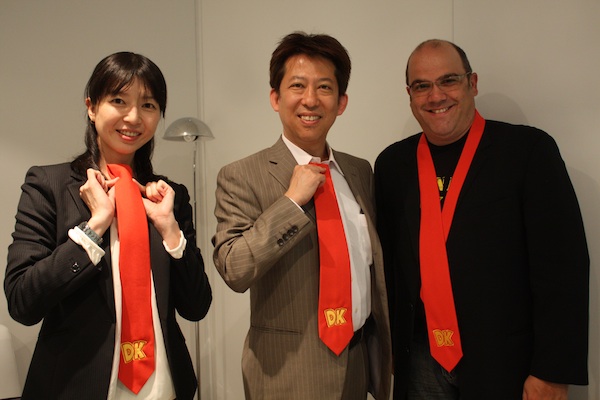 Above: From left to right: Risa Tabata, Kensuke Tanabe, and Michael Kelbaugh

Kelbaugh and Tabata immediately thought of ways of using the GamePad to display information to the player — like incorporating the suit’s HUD elements on the controller’s touchscreen — and for minigames, such as turning Samus’s ball-morphing ability into a pinball-like game.

“Samus obviously has a lot of features [in her space suit],” said Tabata. “There’s a lot you can do with that thing — once she pulls her arm up and pulls out that [metal flap] and does some of this stuff [Tabata pretends to punch buttons on her forearm]. I can see mapping some of that to the GamePad. I think that would be really cool.”

Tanabe, meanwhile, focused on what the shooting gameplay might feel like. At first, the translator had trouble figuring out what Tanabe meant, going back and forth to confirm what he heard. Here’s what he had to say.

“I [told Tanabe], ‘What, you want to hook a GamePad on a Zapper [gun peripheral]?'” recounted the translator. “He said: ‘No, that’d be too heavy. Maybe something more streamlined. But like a Zapper-style thing with a GamePad feature on it or some device like that. I’d love to do some shooting stuff with something like that! Maybe some day.’”

Tanabe wasn’t done brainstorming. Toward the end of our interview, he spoke up about another type of game that he’d like to put on the Wii U. But he focused on a peculiar character — Tingle. He has a reputation for being one of the most annoying characters in the Nintendo roster — Tingle’s a middle-aged man dressed in tights who likes to yell “Tingle, Tingle, Kooloo-Limpah!” — but that’s exactly why Tanabe finds the idea of a new, standalone Tingle game so compelling.

Above: The much-reviled Tingle from The Legend of Zelda games.

“There’s no definitive plan or anything,” he warned me at first. “It’s just me off the top of my head.” But as Tanabe spoke in Japanese, the room suddenly exploded into laughter. It took a second for the translator to calm down and tell me what he said.

“I know how hated the character of Tingle is in the U.S,” Tanabe started. “I know that people cannot stand Tingle. But to me that challenge is: Could I take this character that is so reviled in the West and just [do] a complete turnaround and make him a beloved, fun character? The idea of that really just gets me going. I know we have made a Tingle game in the past, but maybe at some point down the road. …”

My reaction gradually changed from horror, to bewilderment — is he serious!? — and finally to curiosity as Tanabe explained himself.

“It’s like love,” Tanabe said. “It’s like romance: You meet someone and you’re like, ‘Oh god, I can’t stand that person.’ And then three weeks later, you’re madly in love — it’s that turn, that quick whip, that motivates [me] a little bit.”

“If we we ever get a really successful Tingle game, maybe we will have like a big Tingle statue out there [points to Nintendo’s E3 booth outside the room’s walls],” said Tabata.

“Retro does Tingle!” Kelbaugh added, playing along with the joke. Another round of laughter swept through our little room.

I don’t know about you, but I believe in Tanabe’s vision. Forget Metroid — at E3 2014, I better see this damn Tingle game.