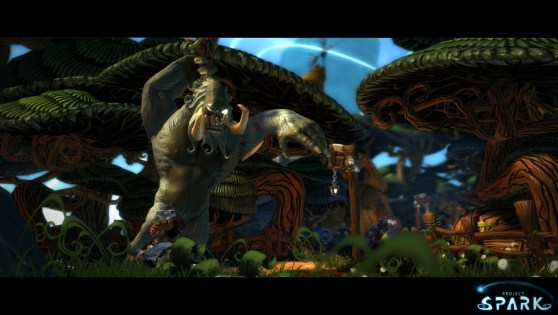 LOS ANGELES — Not everything was cybersoldiers and headshots at Microsoft’s Electronic Entertainment Expo (E3) showing. GamesBeat received a behind-closed-doors demo of Project Spark, the Xbox One’s free-to-play creation game. Somewhere between LittleBigPlanet and Microsoft’s own Kodu and Fable, Project Spark emphasizes building, or “remixing,” fantasy worlds and adventures. But what that means exactly is somewhat blurry, with test players having already created minigames and gameplay mechanics outside the confines of what even the developers believed possible.

As seen in the video below, Project Spark eschews LittleBigPlanet’s sidescrolling presentation for a colorful open world, and it replaces LBP’s immensely dense creation tools with on-the-fly options that players of all ages and skill levels can immediately benefit from.

Although the keyboard demo was impressive and spoke to the seemingly endless possibilities Project Spark allows for, I was more intrigued by a quick demo of a turn-based dungeon-crawling RPG that followed. A hybrid of games like Diablo and Final Fantasy, this demo further solidified Project Spark’s true potential. A member of the development team said that in this dungeon crawler, he had designed it so that you can’t jump. However, his son insisted that jumping was a necessity and so took the controller and a minute later jumping had replaced the “Dodge” ability with jumping.

I was also shown how easy it is to create a customized story campaign, complete with intertwining quests and dynamic collectibles and challenges. It all comes down to Project Spark’s extremely accessible user interface, something LittleBigPlanet wasn’t especially good at. Players can join each others’ games or share and download creations from the community.

Project Spark will be released as a free-to-play title with various paid DLC for Windows 8 and Xbox One.