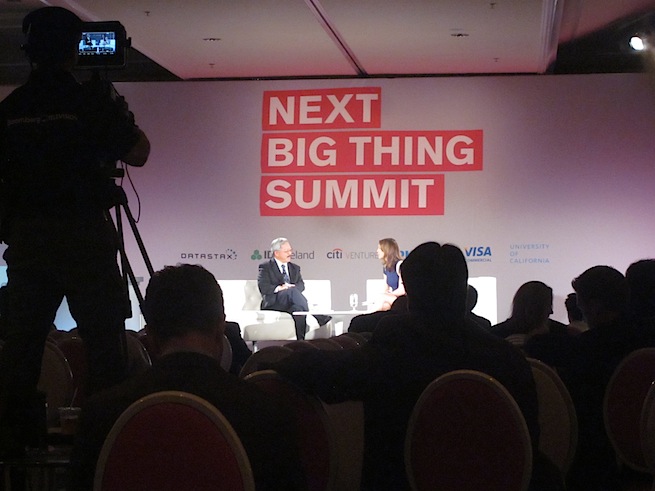 San Francisco Mayor Ed Lee praised Twitter today, saying that 11 companies have found a home in Twitter’s mid-Market Street location due to the company’s commitment to the run-down section of the city.

“Bless them. They located an area where we really needed investment,” said Lee at Bloomberg’s Next Big Thing conference. “It’s kind of our city’s Skid Row. … [The warehouse where Twitter is headquartered]”

Lee says there are a total of 1,826 tech companies in San Francisco county (the city and the county share the same boundaries), which employ over 42,000 people. But payroll tax often draws these growing tech companies from the city into surrounding areas. Lee explained that it was a two-way street working with Twitter to keep the company in the city.

“I said, well, look, I can’t just give you a free tax break; we got to get something for it,” said Lee. “Now mid-Market is thriving.”

Not every company can get a tax break, however, and that’s where Lee is looking to three other factors he hopes will keep tech companies and their employees in the city: education, infrastructure, and arts and culture. And, it seems to be a circle of replenishment. Tech companies that grow big in San Francisco are starting to give back to these three city needs. Salesforce donated millions for the San Francisco’s public school system.

Despite this cyclical support, however, tech is still not the biggest job creator for San Francisco. Tourism remains the largest industry in the city. Guess a lot of people really like that bridge.