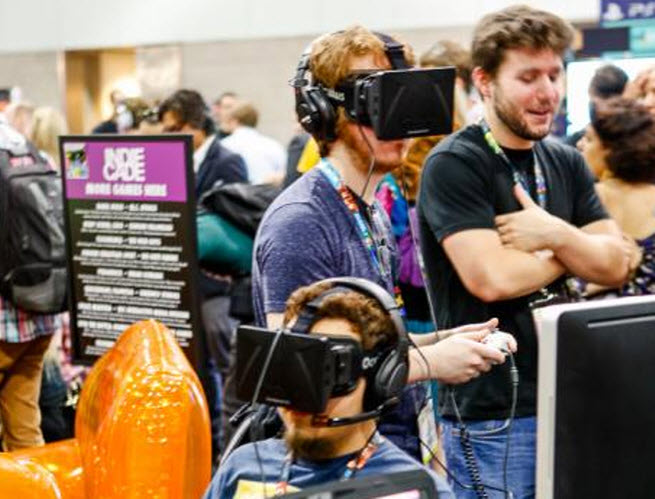 We forget sometimes that video games are like supercomputer simulations, masterful demonstrations of technology used in the service of entertainment. So don’t be surprised that some of the best new technologies are being created in conjunction with games. Here’s GamesBeat’s perspective on the best new technologies at the Electronic Entertainment Expo (E3), the big video game trade show held last week in Los Angeles.

1. Oculus VR showed off the latest prototype of its industry-buzz building Oculus Rift virtual-reality headset — featuring a hot-off-the-factory-line 1080p panel. “We’re now putting the flag in the ground. … It’s at least 1080p. That’s what we’re showing here,” Brendan Iribe, Oculus VR chief executive officer, told GamesBeat. “Most likely, this is what people are going to be experiencing.” The unit featured a significantly better picture than the developer model that shipped to the Rift’s Kickstarter backers. “We’re still optimizing the lenses. … There’s a whole number of things that we’re still looking at,” Iribe said. Regardless, a better image leads to a better effect. What Oculus demoed provided an exciting look into the future of immersive gaming experiences — and other simulated endeavors. – Eduardo Moutinho. 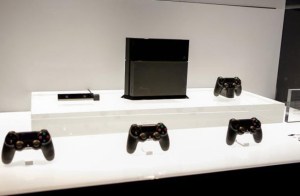 2. Sony’s PlayStation 4 is an impressive piece of hardware. It uses the same silicon cores from Advanced Micro Devices as Microsoft’s Xbox One console. But Sony focused all of its engineering efforts on making games look their best. Sony’s machine uses faster GDDR5 graphics-oriented random access memory. And because it has one operating system instead of three, it requires less memory for the box’s overhead operations. The graphics memory delivers 176 gigabytes per second of memory to the combined CPU/GPU chip, compared to 68 gigabytes for the Xbox One. Sony’s machine will likely be able to display 4K video and games once the higher resolution televisions and displays arrive. While Microsoft dedicated its console budget to entertainment and Kinect features, Sony went all in on games. That could be a winning formula in head-to-head comparisons. But it’s up to game developers to exploit Sony’s processing advantage. If they can’t make games that stand out from Microsoft’s, then the bet won’t pay off as well as expected. Of course, Sony can’t brag too much: The high-end PC will run circles around the PS 4. – Dean Takahashi

3.Microsoft’s new Kinect is a tech marvel that uses 3D depth sensors, microphones, and a high-definition camera to capture your body in motion. The new version for the Xbox One can detect up to six people at the same time instead of just two. The field of view is 60 percent wider, so you don’t have to stand ten feet away anymore. It can distinguish among your fingers, whether you are smiling or frowing, which way your limbs are turned, and even detect your heatbeat based on movements in your face. The system can recognize your voice and it will respond instantly if you say “Xbox on” by turning on the machine from a deep sleep. Kinect can recognize your face and automatically switch to your preferences when you pick up a controller. You can issue voice commands and it will respond instantly if you want to change the channel on your television or answer an incoming Skype call. It’s so good that Microsoft had to reassure people that it would not use Kinect to spy on people and that players have the option to turn it off if they wish. Kinect uses two dedicated silicon chips in the Xbox One to handle all of its processing needs, but it can tap the cloud as well. – Dean Takahashi 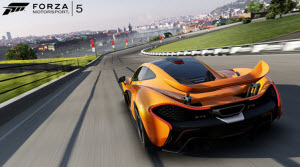 4. Microsoft’s cloud processing holds a lot of promise for the Xbox One. With cloud processing, the game console offloads non-urgent processing tasks to the web-connected data centers. This so-called cloud of processors can be much more powerful than the game console alone, performing tasks such as artificial intelligence or background rendering that aren’t as essential to the instantaneous twitch experience of games. That means that one day, Microsoft could simply upgrade its hardware for the Xbox One by upgrading the hardware in its data centers. The technology will be useful in Forza Motorsport 5, a racing game where artificial intelligence is used to create rival drivers for the computer-controlled cars that you race against. The so-called Drivatar captures your patterns as a driver and uploads them to the cloud. Once analyzed, the Drivatar delivers an AI driver that approximates the same kind of skilled driving that you demonstrate in your games. Dan Greenawalt, creative director at Turn Ten Studios, the maker of Forza, calls this the “death of AI.” We’re not so sure about that, but it makes sense to split some processing between Microsoft’s 300,000 servers and the Xbox One. In a demo, Microsoft showed that it could turn an asteroid belt with 40,000 asteroids rendered on a local machine to an asteroid belt with 500,000 asteroids using cloud processing. The danger of cloud processing is that you might lose your internet connection. But in that case, the technology should fail over to local processing without a hitch. – Dean Takahashi

5. Microsoft’s Xbox One game controller is a step above the last generation when it comes to immersive, tactile feedback. The company was able to physically test lots of models thanks to its rapid prototyping 3D printer technology. The new device has magnetic triggers for both index fingers. These triggers can give you different touch feedback. Older controllers would simply shake when you were shooting a gun. But the new controller sends different sensations. Microsoft hasn’t shown the tech working in games yet, but it showed off a half-dozen demos that make you feel things like the kick of a gun, the rumble of helicopter rotors, the squeal of brakes in ca race car, and even the beat of your very own heartbeat, which Kinect can detect. The device does’t have a “share button” or a touchpad like Sony’s controller. But it does have an infrared LED on the front of the controller that, when combined with Kinect, can clearly identify the person who is using the controller. As a result, you can easily jump in and out of games. This may not seem like much of an advantage on the surface, but it is an improvement to the overall experience of playing games that you’ll know for sure when you feel it in your hands. – Dean Takahashi 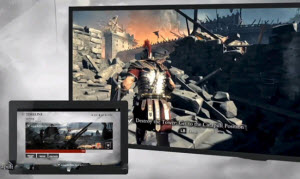 6. Microsoft Xbox Smartglass has moved forward as a “second screen” app that serves as a companion for your games. Smartglass is integrated directly into Xbox One so you can use a Microsoft smartphone or tablet to control or view features in your game. You can use Smartglass to start a game, set up and launch multiplayer, look at your achievements, and view the timeline. While watching a demo of Crytek’s Ryse: Son of Rome game, I saw that the timeline tells you what percent of a game’s level you have completed while you are playing it. You can view game play hints, status of friends, and see the stats of your friends and how they stack up against your own. Xbox Smartglass will match you based on your skill, your language, and your reputation. – Dean Takahashi 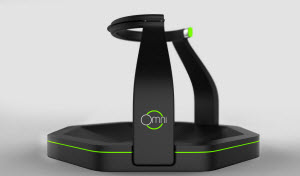 7. The Virtuix Omni is similar to devices like the Oculus Rift. It plans to deliver more immersive gameplay for players. The Omni, however, is all about movement. According to Simon Solotko, public relations representative for Virtuix, “The Omni is a natural interface for virtual reality that enables locomotion. It enables you to run, walk, or jump in virtual reality.”

GamesBeat experienced the Omni first hand, and the technology shows promise. Virtuix chief executive officer Jan Goetgeluk skillfully played through a Half-Life 2 demo, successfully navigating one of the levels from the first-person shooter. The entire setup consisted of an Omni, Oculus Rift, Microsoft Kinect (for body-tracking purposes), and a standard console gun controller. Players will have to wear special shoes and strap themselves to a belt harness that rests on a safety ring connected to the device. Then, they can walk or run in place by sliding around the Omni’s frictionless base.

While awkward for newcomers, Goetgeluk showed that one can get used to the process. The Omni is just another piece of tech poised to take our gaming experiences to new and exciting frontiers –Eduardo Moutinho. 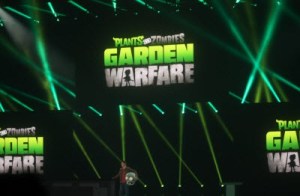 8. Frostbite 3 is the core engine behind DICE’s Battlefield series. The division of Electronic Arts built a platform for creating high-end 3D games with the editing tools to create spectacular 3D imagery. Battlefield 4 will get the benefits of Frostbite 3, which includes destructible environments and ultra-realistic character animations. EA says that Frostbite 3 in Battlefield 4 will deliver scale and destruction, showing you how huge events such as explosions can be rendered against a sophisticated environment. It also features realistic character animation and immersive audio. EA has bragged about the synergies of its game engines before, but it was infamous for the failure of the Criterion RenderWare acquisition. EA bought Criterion in 2004 for $48 million to create games for the last generation of consoles. But developers hated it and the technology failed. Frank Gibeau, president of worldwide game studios at EA, said that the company once had 17 game engines to build its games. Now it is reusing Frostbite 3 and its Ignite sports game engine for all of its titles. Among the Frostbite 3 engine games: Plants vs. Zombies: Garden Warfare, Command & Conquer, and Mirror’s Edge 2. – Dean Takahashi 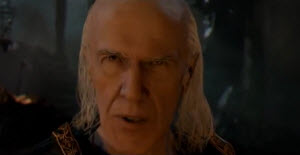 9. The Dark Sorcerer short film is Quantic Dream’s latest attempt to create human faces so realistic that they cross the uncanny valley. That’s the aesthetic concept thatholds that the closer animated human faces approach reality, the more unnatural they seem. The video played at E3 is meant to suggests the level of photorealism that the PlayStation 4 console can achieve when it comes to rendering faces, particles, flames, and water drops. The animated face of the Dark Sorcerer is indeed just that — a 3D animation — even though it looks so real. At the moment, Quantic Dream has no plans to turn The Dark Sorcerer, acted by David Gant and directed by Quantic Dream’s David Cage, into a full game. While it seems like a serious demo at first, you’ll quickly see that the The Dark Sorcerer is a comedic spoof of both filmmaking and video game development. Earlier this year, Quantic Dream released a demo dubbed Kara that also demonstrated a new level of emotional realism in 3D-animated human facial expressions. – Dean Takahashi

10. Project Shield is Nvidia’s Hail Mary play to participate in the video game business. Shut out by the console makers when it came to graphics chips, Nvidia decided to build its own portable gaming device using its Tegra 4 mobile processor and the Google Android operating system. Going on sale later this month for $349, Shield can play Android games on a 5-inch high-resolution that is attached to a game controller. The device is aimed at hardcore gamers who want to play Android games on their living room TV, using an HDMI cable for connectivity. Shield will also enable gamers to play PC-based Steam games on the big-screen TV. It remains to be seen if the demand exists for Shield amid so many other devices. Ouya is a competitor bringing Android to the TV, and so are devices like Bluestacks GamePop and GameStick. Shield itself may not be the winning bet for Android in the living room, but you can bet that mobile will give the console makers a headache at some point, given the free or 99-cent pricing for most mobile games. – Dean Takahashi