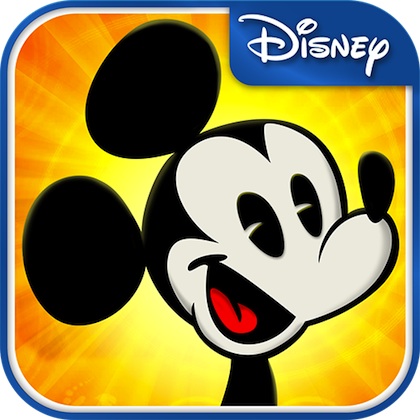 The House of Mouse has come full circle.

Now that Disney has created a cartoon series for Swampy, the alligator from the popular Where’s My Water? puzzle games, the company is calling in its No. 1 star for the next title in its Where’s My … ? series. Like its spiritual predecessors, Where’s My Mickey? is a physics-based puzzler: In each level, you have to guide the water through obstacles so Mickey can fill up his bucket. It comes out this Thursday for phones (iOS, Android, Windows) for $0.99 and tablets (iOS, Android) for $1.99 as well as Windows tablets and PCs for $4.99.

This isn’t the first time Disney has done a spin-off of Where’s My Water?. Last year, it released Where’s My Perry?, which replaced Swampy with Perry the Platypus, a character from the Disney Channel original TV series Phineas and Ferb.

“After Perry was a success, we were talking about [how] we were stumbling on a little bit of a method here to kind of continue to support this cool game idea we came up with,” said Tim FitzRandolph, the vice president of creative design at Disney Mobile Glendale, to GamesBeat. “We started to talk about the next characters. We thought, ‘Let’s swing for the fence. Let’s go for Mickey.’ That’d be the best thing we could possibly do.” 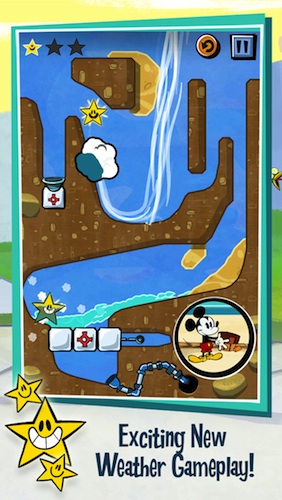 The reason Mickey needs the water varies from one episode to the next; each episode has 20 different puzzle levels. You’ll watch small snippets of the story as you solve each puzzle; however, the developer came up with some inventive ways to thwart Mickey until the very last level of the episode. Where’s My Mickey? also introduces a new gameplay feature: weather. Clouds can store water until you need it in another section of the puzzle while wind will move the clouds in the direction that it’s blowing.

“We had a whole list of ideas for the puzzles that didn’t fit into the existing games,” said FitzRandolph. “And once we found out we were gonna be able to make a Mickey game, we went back and kind of looked there. They weren’t clouds originally; they were sponges — same basic function to catch the water and release it later. Once we realized it was Mickey and we were gonna go above ground, that’s when we realized that clouds were the better way of using this idea we had in mind all along.”

Where’s My Mickey? is intricately tied into the upcoming series of animated Mickey Mouse shorts coming later this month to Disney Channel and Disney.com (a teaser episode came out a few months ago). Disney gave us a preview of two of these shorts. They all sport a crisp, clean look, and they embody the spirit of Walt Disney’s original short-films by emphasizing visual gags over dialogue. Both the game and the new cartoon maintain the same art style, and Where’s My Mickey? even references some of these episodes with in-game collectible items and jokes.

“We realized [the new look] would work really well for our medium as well. Very simple graphic styles are great for us,” said FitzRandolph. “And we need a character to be really easy to see on a small portion of the screen. And so the art styles really worked out well that way.”

The original Where’s My Water? has had 200 million downloads since its launch 18 months ago. Disney still updates it regularly with new content.