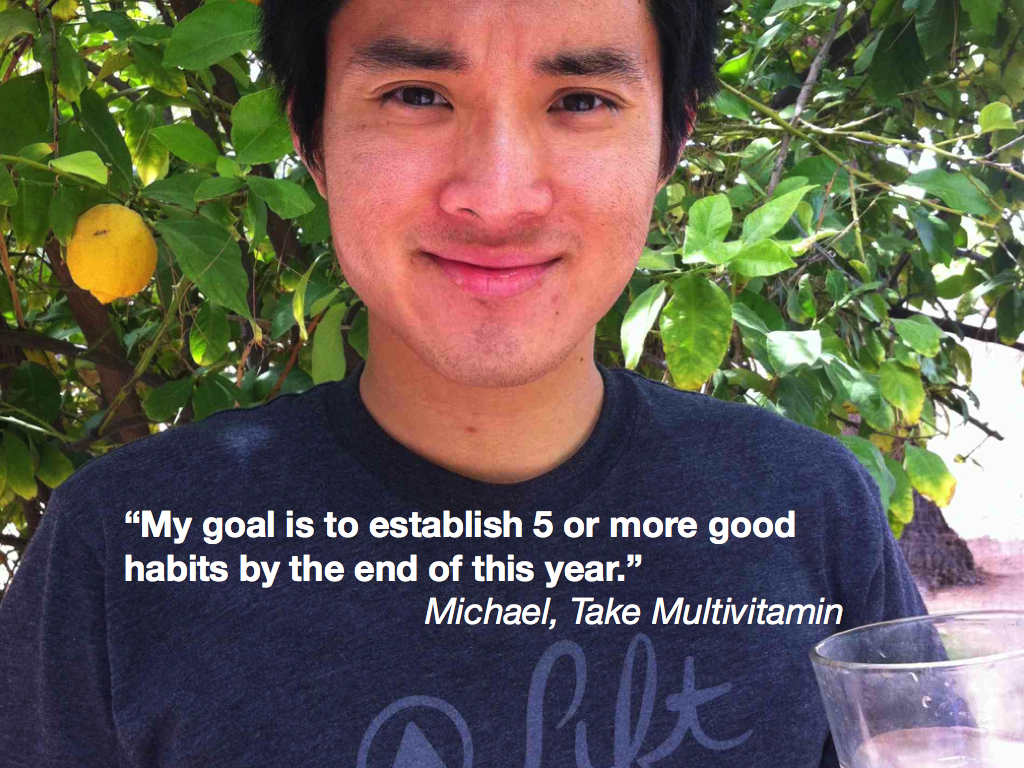 We all know the importance of eating well, exercising regularly, and getting enough sleep, but good habits can be hard to maintain.

Today buzzed-about startup Lift opened up its platform to all web and mobile users, making it easier for anyone to achieve their goals. Lift has built a social goal-tracking application where people can create lists of habits they want to maintain, monitor their own progress, and connect with friends for motivation, accountability, and support. The most popular habits in the app are exercising, drinking more water, reading, and flossing. Each goal has a community of people that can leave encouraging messages, and Lift will compile personal reports to tell you how you are doing.

Lift was the first product to launch out of Obvious Corporation, the incubator and seed fund run by Twitter founders Evan Williams and Biz Stone. Lift founder Tony Stubblebine was part of the original team of Odeo, a podcasting service that eventually pivoted to become Twitter. At the time, he was Jack Dorsey’s boss and worked alongside Ev, Biz, and Instagram founder Kevin Systrom, who worked as an intern. He observed how a key part of success was the ability to focus on accomplishing the “right things.” Stubblebine decided to build software that could help people be more successful — whether that entails building a major tech company or trying to lose a couple pounds.

“We live in a world where you can get a lot of advice and track your behaviors, but there isn’t always support to achieve your goals,” Stubblebine said in an interview. “Lift actually helps you shape and change your behaviors so you become hardwired to think and do better. It’s persuasive technology, and it gets deeper than quantified self apps.”

Lift started out as a simple iPhone application. There are not a lot of bells and whistles or eye-catching design. The focus is strictly on giving people the data, tools, and environment they need to be better versions of themselves. The system creates a feedback loop that reinforces positive choices and cuts down on feelings of “conscious effort” or “decision-making fatigue.” Once you acclimate to waking up early to go running or eating salads for lunch, it doesn’t seem quite so difficult to do those things.

“Willpower can be measured physically,” Stubblebine said. “You can only make so many decisions in a day, and people are constantly bombarded with distractions, so they don’t have decision-making willpower to pursue their goals. Habit is powerful, and when you turn things that feel like making a decision into a habit, when it becomes automatic, it won’t wear you down. We aren’t prescriptive at Lift. We are not trying to fix you. You can be who you want to be, but people have unmet ambition, and one of the top reasons is they just don’t have the support.”

Now, after almost a year of early beta testing, Lift is available on the web and all smartphones. The app is free for users, and Stubblebine said he is not concerned with monetization yet. The priority is building a platform that helps people in a meaningful way. Lift is also soft-launching a group feature where people can train with experts, like Tim Ferriss and Leo Babauta of the popular Zenhabits blog.

In November 2012, Lift announced that it raised a $2.5 million seed round led by Spark Capital with participation from SV Angel. It is based in San Francisco.