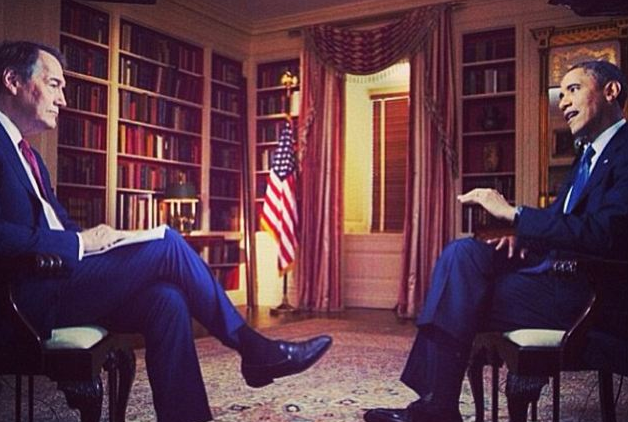 President Barack Obama wants you to know that those PRISM slides you saw last week aren’t the full picture.

The president appeared on the Charlie Rose show Monday night, defending the National Security Agency’s surveillance practices and attempting to calm the fears that the government’s antiterrorism efforts are infringing on the freedoms of Americans. The broadcast came on the same day as that NSA whistleblower Edward Snowden answered readers’ questions via the Guardian‘s website, making Monday an interesting day for anyone following both sides of the ongoing debate over the NSA’s practices.

Here’s what Obama wants you to know:

Security vs. freedom is a false choice

Security or freedom? If you’re like a lot people, you probably don’t think they’re compatible. But Obama disagrees. “We don’t have to sacrifice freedom in order to achieve security. That’s a false choice,” he said.

Obama did note, however, that there are trade-offs that have to be made in these sorts of arrangements — and by “trade-offs,” we can only assume he means “privacy.”

The NSA’s phone-snooping program is full of oversight

Another common defense of the NSA’s surveillance programs is plain old checks and balances. As Obama pointed out, the NSA’s activity is overseen by both Foreign Intelligence Surveillance Act (FISA) courts and congress, which makes the entire snooping process both legal and transparent.

“My concern has always been not that we shouldn’t do intelligence-gathering to prevent terrorism but rather are we setting up a system of checks and balances?” Obama said.

The problem, of course, is that much of that checks-and-balances process is kept secret, which isn’t much comfort for those who don’t trust the government to begin with.

Metadata-matching is possible, but no one’s doing it because … well, it’s illegal

Probably the biggest fear attached to metadata — data like when and where a phone call is made, for instance — is that it can be very, very powerful in bulk, particularly when it’s matched against other data. This is true even if the data is “anonymized.” Once you learn a lot of disparate information about someone, you can get a pretty good sense of who they are and what they’re into — regardless of whether you know their names.

While Obama conceded that as true, he dismissed the concerns on the basis that that sort of data-matching is illegal under current programs. “We would not be allowed to do that,” he said.

Translation: It’s not that the NSA doesn’t have the capacity to do widespread matching analysis on the data it collects; it’s that the law prevents it from doing so. Still, as many have point out, there’s very little preventing the government from changing that law to suit increased data collection and analysis.

The NSA programs focus on foreigners, not Americans

One of the most strict limitations applied to the NSA’s surveillance programs is that they apply to foreigners, not Americans. Moreover, as Obama pointed out, the NSA’s investigations are narrow and focus on matters related to “counterterrorism, weapons proliferation, cyber hacking or attacks.”

While that might be something of a solace for Americans, it’s certainly not one for the rest of the world. In a letter sent today to Congress on Tuesday, an international group of nonprofit organizations said that the U.S. government has the responsibility to respect the privacy of not just its own people but the rest of the world as well.

“The contradiction between the persistent affirmation of human rights online by the U.S. government and the recent allegations of what appears to be mass surveillance of U.S. and non-U.S. citizens by that same government is very disturbing and carries negative repercussions on the global stage,” the group said.