Roughly 21.6 million Americans would buy Google Glass if it were available, a new Forrester report says. But the current Explorer version is more of a Newton — Apple’s flawed and failed PDA — than an iPhone.

That’s 12 percent of the adult population. 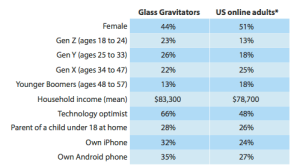 In fact, despite the current prototype model’s limited battery life and restrictive API, Glass is more of a “when” than an “if” product, according to the survey of more than 4,600 U.S. adults.

“Glass is continuously improving via over-the-air updates and new applications, and we have no doubt that in time, Glass will be the next iPhone,” the Forrester study says.

A group of “Glass Gravitors,” Forrester says, who are tech optimists mostly under the age of 50, mostly high-income, and only slightly more male than female. And they’re people who want to be “perpetually connected” to data sources such as maps, local business information, and products — not to mention people, their names, and information about them from social media sources.

But head-mounted glasses-based wearable computing is not the only game in town. Other form factors are also of interest: 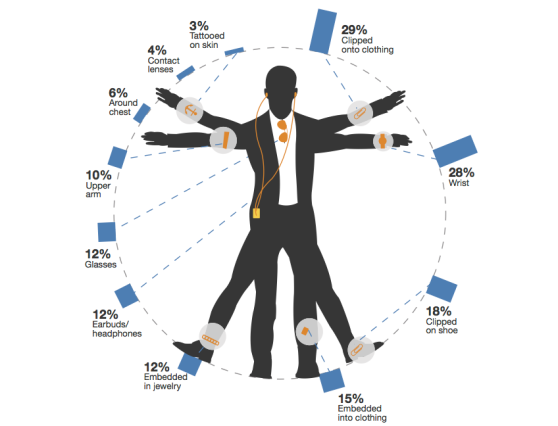 Above: Wearable computing has big potential, and not just on the face

But the early adopters, besides the “Glass Gravitors,” will be businesses. Field-maintenance reps who can refer to manuals hands-free, surgeons, construction managers, farmers, paramedics, and creative professionals will all find uses for Google Glass.

Oh, and one thing that Glass isn’t?

Contrary to Noam Chomsky’s belief that Glass is a privacy-destroying, Orwellian technology, Forrester says that Glass is not a good covert-surveillance camera — it’s too obvious, and its battery life is too limited. There are better, less conspicuous devices for this purpose, according to the study.

To deliver on its promise and emerge from the Newton class of devices, Glass needs better battery life, Forrester says, along with better augmented-reality technology and built-in ad hoc networking to communicate with devices — both yours and others — more easily. In addition, Glass apps, which today are more like SMS than smartphone apps, could benefit from some increased level of sophistication.