Foundry Quests are the real centerpieces, however. Players can build their own very deep and personalized quests, and these are playable anytime. They’re great ways to gain experience. Cryptic Studios has even established an excellent system for sorting through them. Adventurers can leave ratings and reviews, and you can even follow someone to keep track of all their quests. What amazed me, though, is how much creativity and thought players have put into some of these. These are where the real Dungeons & Dragons experiences are since many of the players making them are longtime fans. 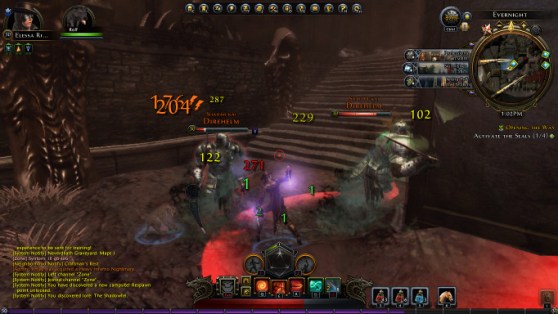 Awesome enemies
While enemies and especially environments are bland at first, they do improve as you progress. I started out fighting bandits, guards, goblins, and orcs — typical fantasy fare and not much of a threat. Later I was scuffling with giant (and baby) spiders, undead pirates, werewolves and electrified storm wolves, ghosts, lizardfolk, demons big and small, and much more — including the occasional gelatinous cube (see the gallery at the end).

These are much more interesting and exciting to see running around your screen, but maybe I’m just a sucker for weird monsters. They have fun personalities, too. The tiny demons — the imps — are a little too excited to try to send you to hell, and it’s not every day that wolves can zap you.

Social problems
Neverwinter is free to play, and that may worry a lot of people. It shouldn’t. It’s completely functional without a fancy mount or supercool companion, but you’ll be extremely jealous of the players you see riding around on an armored spider or Inferno Nightmare steed. That doesn’t mean you actually need those things.

While you won’t have trouble acquiring most types of currencies, the value of Zen (the money you need to purchase all those fancy extras) is extraordinarily high. And you have no easy way to earn it. You either pay real money (about $1 per 100 Zen) or exchange ridiculous amounts of ADs for them. You can’t simply buy it with ADs, either. Players must offer them up for trade on the Astral Diamond Exchange, choosing how many ADs they’re willing to give for however much Zen. Then the players with the Zen decide whether that trade is worthwhile. 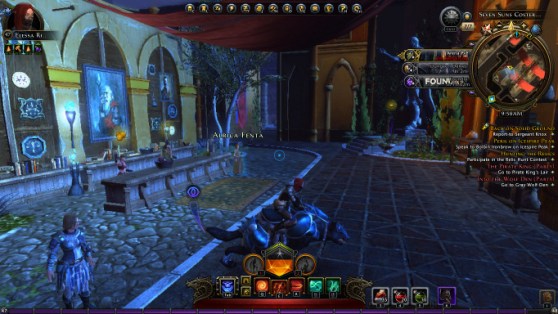 The going exchange rate is pretty high, too: around 300 ADs for one Zen. This is a pretty steep price for most players, especially early on, when the several daily quests you can do (the biggest payouts) only provide 1,000 or so ADs each. Imagine how long it takes to earn 45,000 — or enough to get 150 Zen if an affluent player deems that a fair trade. As an example, 150 Zen will get you an Enchanted Key, a relatively cheap item that you need to open the dozens of Nightmare Lockboxes (special lottery-like chests) you’ll accumulate during your adventures. I never saw fit to buy a key to open even one.

Sure, you don’t need Zen. But the system is a little rigged. Want to dye your outfit from drab peasant-brown to blue, red, or black? That’ll cost you Zen, but it’s not worth it. As soon as you find a better piece of equipment, you’ll swap it out. Neverwinter restricts you in other minor but annoying ways. Your first choices for companions, for example, are pretty boring — only one animal is available to start, and that’s a gray dog.

Class issues
When it comes to balancing, Neverwinter suffers in two areas: companion level and PvP.

For most of the game, companions are great company. You barely have to worry about their well-being, and they’ll back you up in a fight. Then their level cuts off at 15 (for most companions, anyway). By the time I was around level 40, my Cleric couldn’t pull her weight. I ended up healing and babysitting her more than she helped me. And before you knock her for being too weak (she’s one of the basic starter companions), note that my rare Acolyte of Kelemvor, who fetches a higher price on the market and can reach level 25 as opposed to 15, couldn’t do much better. 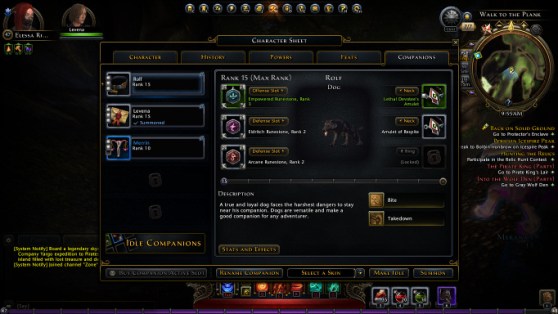 PvP is another problem. First, all that’s currently available is Domination, which gets old fast. Cryptic Studios just released a PvP and player-versus-environment (PvE) expansion today called Gauntlgrym, but that’s for level-60 players only (so I haven’t tried it yet). That doesn’t leave a scrap for anyone else, and it’s strange that adding in an elite PvP is Cryptic’s first priority.

But back to class-balancing in PvP: While it seems that every class has its strengths and weaknesses, their differences really showed in these matches. Some people will definitely disagree with me, but I found Control Wizards to be the most overpowered (at least in PvP). Yes, Guardian Fighters and Great Warrior Fighters are strong, but nearly every time I died, a Control Wizard was behind it. He dealt the damage that made me easy prey for another class or immobilized me with ranged spells and other tricks. These guys can magically push me away from them, teleport to safety as I attack, slow my movements, raise me up in the air to strangle me and prevent me from escaping, and torment me with a special power that hits me wherever I go. And they can do it all from a spot far enough away that you might not even know they’re around.

The Foundry Editor
Although I loved playing Foundry Quests, I groaned while trying to make them myself. The Foundry Editor is a complicated program that you can open at the start screen, and it resembles some boring, grey Windows application that you don’t want to even try to understand. I made an effort, though, and even followed the wikis that are available to players. I still found it incredibly confusing and painstaking.

In places, the Editor tries to simplify tasks for you. It splits the process up into manageable sections, enables you to test your quest by playing it from any major point, and even alerts you when something is wrong. But it’s still complex, and I found myself wishing that I could create quests in real time on a 3D map of the environment. I felt like I was working blind from within the program; when I went into the game world to test, what I thought I had done was much different in execution. 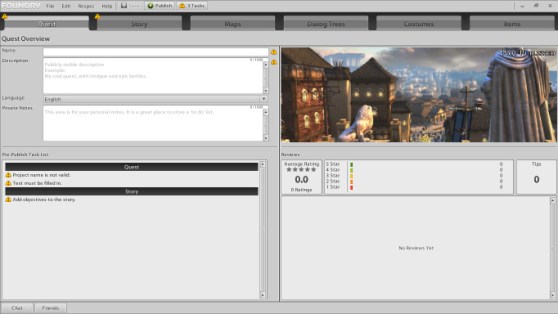 We need a Foundry Editor for dummies, Cryptic.