Dungeons & Dragons lite
Now, I’m not a D&D player, but I did ask a few friends what they valued in the game before heading into Neverwinter. Choice, they said, and customization. The ability to control or shape the quest as it happens. And lots and lots of mythology.

Well, Neverwinter has customization, and it has mythology. You’ll gather countless pages of lore and learn about all sorts of coups, races, monsters, history, and so forth. What’s missing, though, is that sense of either playing Dungeon Master or manipulating the quest as you go along.

That’s where the Foundry Quests come in. Aside from the lore and dice-rolling, which determines which players win what loot, Neverwinter is light on a traditional D&D feel. But in their custom quests, players often create areas with much more mystery than what you find in the actual game. They describe objects you see and add a little enigma to it. I wish the main game had nearly as much atmosphere and imagination underlying its quests, which you do with routine efficiency.

Optional dungeons
You might think it’s nice to be able to skip dungeons, and in truth, it kind of is. These are party-based affairs, and they usually take at least 45 minutes to complete. However, when I missed the Lair of the Mad Dragon quest (my level got too high) and then realized I could do the same for the other dungeons, I was both irritated and disappointed. Unless you look up where the dungeon is later, you’ll have trouble finding it when you do want to play it. It’s not marked on your map. And missing these quests the first time around renders your role in the story, well, kind of useless. You’re supposed to fight the big bads there, but really, you’re disposable. Neverwinter will get along just fine without your heroism. It’s got a hundred other adventurers to fill in. This more than broke my immersion in the world and narrative. 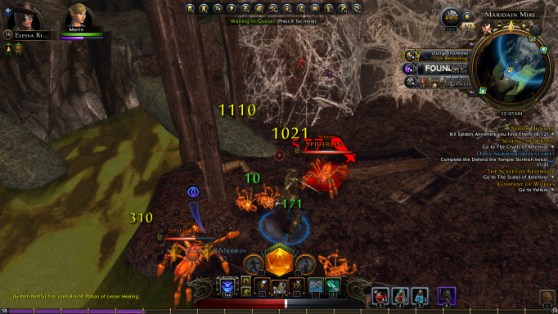 A little buggy
I didn’t encounter too many big bugs during my playthrough (spiders don’t count — they’re arthropods!), but Neverwinter is filled with little glitches. It it fresh out of open beta, after all, but it’s hard to go a few hours without noticing something that’s off. Thankfully, when you do run into a nasty problem, Cryptic has a good system in place to get you out.

My real gripe, though, isn’t a glitch, but it is something dumb that I feel Cryptic should address immediately. (When they made the nonplayable characters less chatty, for example, it was the best news ever.) Not all like items will stack together in your inventory because they’re either unbound or bound to your character. They do this so you can’t sell used equipment and items at the auction house. This creates a scenario where you can’t group all your potions together, for example, because most of them are probably unbound while a few are bound. If only you could click an option to bind them all, it wouldn’t be as big of a problem. Right now, it’s just an annoyance.

Neverwinter is a fun game, and it’s an excellent introduction to the MMO genre. It doesn’t feel like you need to dump hundreds of hours into it, either, which may be a drawback for those concerned about endgame. However, I only made it so far through, and Cryptic seems prepared to support the game with new content like Gauntlgrym and the free expansion Fury of the Feywild, which is due this summer.

While the free-to-play system doesn’t cripple Neverwinter by any means, it will start to annoy some players because of its weird restrictions. “I hate those guys with the giant spider mounts,” one player told me in game. I agreed. Cryptic could benefit from lowering the value of Zen a bit or making it more accessible to players who don’t want to spend real money (maybe by allowing them to buy it with ADs?). In addition, the developer’s next focus should be to continue cleaning up the bugs, refining and adding more PvP modes, raising companion level caps, and definitely working on a more user-friendly Foundry Editor.

It may have its flaws, but Neverwinter is highly enjoyable and accessible to veteran, beginner, and casual players alike. I’ll see you in the city.

Neverwinter is out June 20, 2013 for PC. The developer provided GamesBeat with a press key to assist with this review. 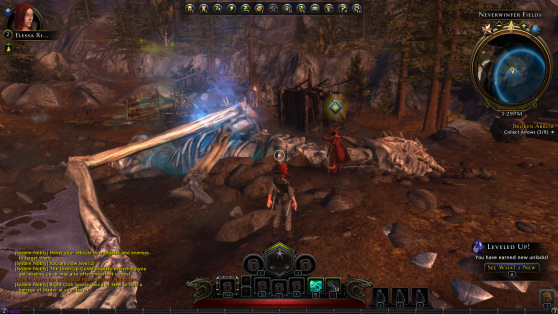 Above: You begin your adventure by washing ashore on a beach. There be dragons in these lands.