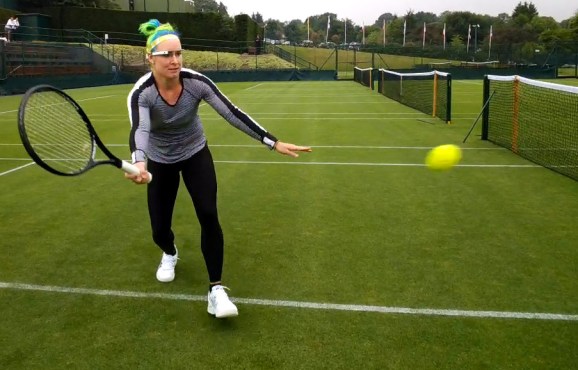 For the first time ever, a pro athlete will be wearing Google Glass while competing.

Pro tennis player Bethanie Mattek-Sands, who’s No. 58 in the Women’s Tennis Association (WTA) rankings, will be wearing Google Glass at Wimbledon (one of the four prestigious Grand Slam major tennis events) this week in London, Google announced this morning. Mattek-Sands is in the Glass Explorer program, a limited sampling of a few thousand people who have been lucky enough to acquire and test Google Glass in prerelease format.

Google has said that Glass is comfortable and unobtrusive, weighing no more than a pair of sunglasses. A pro athlete wearing Glass during her competition — at which world ranking, tournament placing, and prize money is all at stake — is a significant validation of that statement.

Mattek-Sands has already benefited from Glass, Google says, as have her fans:

Glass’s potential in the sports realm is huge, and it can connect athletes, coaches, and fans in new ways. For Bethanie, it’s allowed her to capture her strokes from her point of view during practice and share those with her coaches. It also helps her search recipes and perfect her cooking, something that’s important to a professional athlete with dietary allergies and restrictions. Bethanie’s fans can also see the world through her eyes as she embarks upon the road to Wimbledon, where she’ll play her first match next week.

This also shows a novel use of Google Glass: the capability to provide a platform for coaches to see the game from their athlete’s perspectives and suggest improvements and alternatives.

I know from coaching youth baseball, for instance, that many struggling hitters focus their eyes on the field where they want to hit — not the ball they’re trying to make contact with — and this perpetuates their challenges. Glass could help coaches not just tell players what’s going wrong but also actually show them from their own perspective … which would be a very powerful visual validation of the need for adjustment.

More information is coming soon as I hope to be able to interview Mattek-Sands shortly and provide more details on how she’s using Glass: what works and what doesn’t.