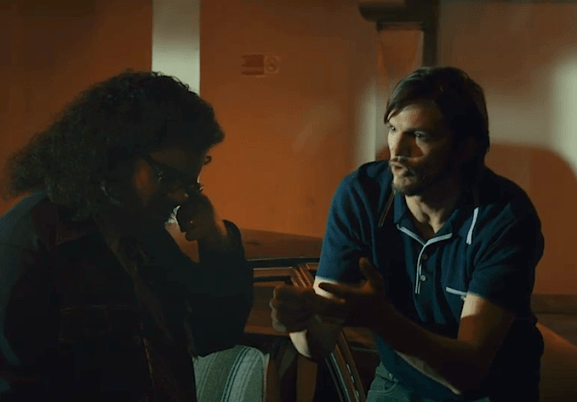 We’ve seen a clip from the highly anticipated Steve Jobs biopic where Ashton Kutcher takes on Apple’s late chief executive. But now we get a trailer.

JOBS, the movie, is set to be released in August, and thus far we’ve only gotten small tastes of Kutcher’s performance through reviews and a clip. Today’s trailer hints at moment of romance, Apple’s first bit of seed money, Jobs’ forced departure from Apple, and his triumphant return. We see the short-tempered and screaming Steve Jobs; the barefoot Steve Jobs; and the inspired, resilient Steve Jobs as he drives along California’s winding, scenic roads. Of course, Mackelmore’s Can’t Hold Us plays in the background (a song currently running in a Microsoft Outlook commercial, as pointed out by VentureBeat’s Jolie O’Dell).

The movie premiered in January at the Sundance Film Festival to mixed reviews. Some said it left out major details in Apple’s story; others said Kutcher’s portrayal of Jobs was enough to carry the film. Kutcher seems to have emulated Jobs’ mannerisms and way of speaking well enough for reviewers to call it “factually accurate” and fantastic.

Kutcher explained in a talk at the Macworld conference in January that he uploaded clips of Jobs speaking to SoundCloud and listened to them throughout the day. According to his co-star, Josh Gad who plays Apple co-founder Steve Wozniak, Kutcher studied the history of Jobs and Apple so well that he could pick out different parts of the set and say, “Get rid of that. It wasn’t built for another year.”